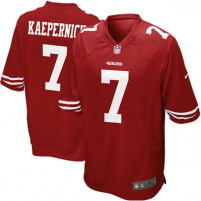 Colin Kaepernick is not even listed as the starting quarterback of the San Francisco 49ers as of September 6, but there is no player in the NFL selling more jerseys than the backup quarterback. As of this morning, the top seller on NFLShop.com is a Kaepernick Nike Scarlet Game Jersey, besting Dallas Cowboys running back Ezekiel Elliot and New York Giants wide receiver Odell Beckham as the most popular jersey leading into the 2016 NFL regular season.

Kaepernick jerseys have experienced a steady climb in popularity since the quarterback decided that he would not stand for the national anthem during 49ers preseason games.