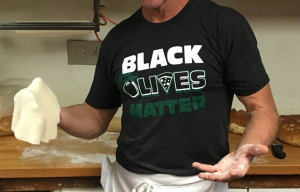 Paisano's in Albuquerque, N.M., is now selling "Black Olives Matter" shirts and hats after making national headlines for putting the phrase on its sign.

Owner Rick Camuglia said he put the phrase on the restaurant's main sign to sell a new dish the restaurant was offering—a tuna dish with black olive tapenade.

Camuglia posted pictures of the dish and the sign on Facebook, which resulted in both backlash and support.

Criticism came from many across the web saying that Camuglia was being insensitive and trivializing an important movement for the African-American community.