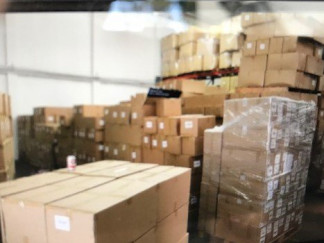 Despite ample warnings from experts and critics, Americans have retained an interest in a number of dangerous habits such as texting while driving, fooling around with fireworks and listening to Nickelback. Though the Consumer Product Safety Commission tabbed all on-the-market hoverboards unsafe in February 2016, the transportation devices have continued to captivate many consumers, as well as counterfeiters who enjoy placing riches over regard for others. On Monday, the Los Angeles County Sheriff’s Department, relying on a tip from safety certifier Underwriters Laboratories, halted an operation whose overseers supposedly possessed up to 3,000 fakes.

The law enforcement entity and its peers have long contended with purveyors of bogus hoverboards, and the aforementioned declaration concerning the overall safety of the products, whether legitimate or phony, means they will likely have many more dealings with those looking to flout the rules. In the recent bust, the department’s Counterfiet and Piracy Enforcement Team headed to a Santa Fe Springs-situated building, detaining and later releasing an unidentified individual. The members did not reveal to a local media organization whether they had made any arrests, but they did make known, through a statement, that the person responsible for storing the hoverboards was not present.

Even before their CPSC rebuke 19 months ago, hoverboards had posed many problems for police personnel, and this year has proven especially disturbing due to a house blaze that claimed the lives of two Pennsylvania children and news that hackers have added the gizmos to their lists of compromised objects. Monday’s bust netted about $1.2 million through the confiscation of between 2,500 and 3,000 imposter products. The numbers can give anyone pause, but what should trouble people more is that falsified labels from Underwriters Laboratories appeared on the shady hoverboards.

Criminals are becoming smarter, and one wonders how much more time that promotional products industry figures, who already work so hard to ensure that their goods meet all legal standards, will need to apply to fending off further improper manifestations. Will hoverboards and other technology-dependent products, which many people contend detach us from reality and taint good old-fashioned face-to-face interactions, actually come to be unifiers in the collective fight against counterfeiters? What do you think?

Atari's Immersive Video Game Hotel Is Coming to Vegas in 2022, But It's Already Selling Branded Merchandise