Why 129,000 People Want Zara and H&M to Drop Some of Their Suppliers

A petition with 129,000 signatures is calling on H&M, Zara and other clothing brands to stop sourcing from producers linked to pollution.

According to BuzzFeed, a report claimed these factories in China, Indonesia and India were damaging local waterways and emitting noxious gases. As a result, The Changing Markets Foundation launched the petition last week to stop these apparel brands from sourcing from these factories. 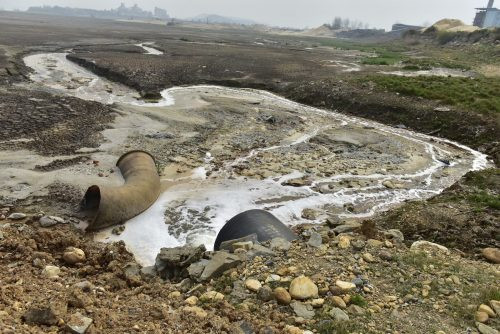 Wastewater near viscose plants in China. (Image via BuzzFeed)

The issue stems from the production of viscose, a manmade clothing material similar to silk. It is made from wood pulp and treated with chemicals. The report found that the chemicals involved in the viscose production seeped into local waterways and air, killing the aquatic life and contaminating the drinking water.

"Cheap production, which is driven by the fast fashion industry, combined with lax enforcement of environmental regulations in China, India, and Indonesia, is proving to be a toxic mix," the report claimed.

"The clothes you sell have been directly linked to devastating air and water pollution at viscose factories in Asia," the petition stated. "As customers across Europe, we demand that you immediately commit to a zero pollution policy and timeline, work with producers to transition to clean technologies, and stop purchasing from producers who fail to comply."

H&M told BuzzFeed News it was "deeply concerned" by the findings, and that it was following up with its viscose suppliers. BuzzFeed also reported that a spokesperson said the company was working to create a new manmade fiber policy, and has developed a tool to evaluate chemical use and wastewater treatment systems.

For promotional apparel suppliers, this might be the time to check on your sourcing cycle to ensure viscose materials from these factories are not in your supply chain.