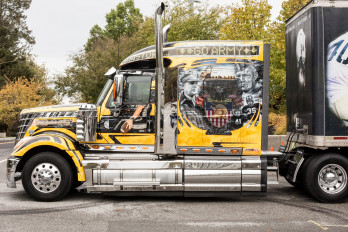 Decorated histories, long winning streaks and zealous fan bases make for a tremble-inducing trinity of means to give college football teams an edge over their foes. But at a time when poet Robert Browning’s “Less is more” stance borders on being a sacrilegious utterance, schools are looking for additional ways to acquire a figurative advantage before they fashion a literal lead. For many institutions, 18-wheeled trucks have helped prove they are also in it for the long haul as athletes pursue prestige, with numerous programs using the vehicles as artistic opportunities to build their brands.

The United States Military Academy last year made a return to respectability after five straight losing seasons, downing North Texas, 38-31, in an overtime thriller to capture the Heart of Texas Bowl. The Black Knights, owners of three national championships, will not likely contend for the whole enchilada anytime soon, but the Army representatives certainly take pride in striving not only to protect our country but also to add to annals that date back to 1891. This year’s club has tallied a 7-2 mark ahead of Saturday’s home tilt against the Duke University Blue Devils, and, according to the New York Times, the masses who make their way to Michie Stadium will be in for a visual treat even if the guests cause an upset.

Army’s 18-wheeler acknowledges Heisman Trophy winners Doc Blanchard and Glenn Davis, misters Inside and Outside to pigskin aficionados, and alumni Douglas MacArthur and Dwight D. Eisenhower, a quartet that, through various roles, defended our freedom after having been gridiron contributors. Outside of Army’s West Point setting, many other facilities, including such high-profile schools as Alabama and Notre Dame, each looking to sustain its championship hopes, are likewise having drivers get their motors running (who doesn’t like a Steppenwolf reference?) to convey not only equipment but also esteem for their employers’ insignias and logos.

The Times article should fetch a few more fans for the University of Utah Utes, whose truck has wrapping that allows television blimps to broadcast the Beehive State location’s branding. Given, as the publication declares, that many teams are traveling more because of conference realignment, the 18-wheelers are getting extra workouts and ample occasions to extend brand reach.

“All the schools are starting to get them,” Georgia resident and Southern Mississippi football buff Harmon Hodge said of the trucks phenomenon that he promotes by including images of the carriers on a website. “Even the smaller schools are getting involved in this.”

No matter their pedigree, all squads want to put themselves in a great position to win. From the Alabamas of the world to the underdogs looking for a program-building triumph, many factors influence how well teams will perform, and, based on The Times inspection of the current state of athletic one-upmanship, these trucks might help programs blaze new trails, especially with respect to recruiting. All’s fair in love and football, it appears.