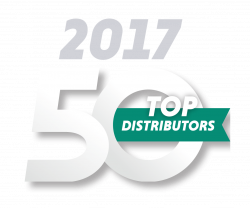 The promotional products industry saw plenty of change in 2016—major acquisitions, ever increasing supply chain and safety concerns, a new administration in Washington, D.C., etc. But that didn't stop industry heavyweights from raking in sales, at least according to our just-released 2017 Top 50 Distributors list. It's a good time to be a promotional products distributor.

The Top 50 totaled $4.476 billion in promotional products sales in 2016. That's a slight drop from the prior year's $4.584 billion tally, but in context it may actually indicate an improvement. National Pen Company, which placed No. 4 on our 2016 Top 50 Distributors list, was acquired by Cimpress in December 2016 and chose not to report its earnings for this year's list. If we assume National Pen Company's sales figures remained the same, that's $260 million off the board, replaced by HDS Marketing's $22.4 million at the No. 50 spot—a net decrease of $237.6 million. In other words, had National Pen Company reported sales, this year's top 50 would have out-earned last year's top 50 by about $100 million, a 2.2 percent gain.

And there were more gains all around. Of the distributors in this year's top 10, eight saw increased promotional products sales compared to the prior year. Jack Nadel International (No. 10) had the largest percentage increase, jumping from $100 million in sales last year to $116 million this year (a 16 percent increase), while 4imprint (No. 1) had the largest dollar increase, earning $61.4 million more than the prior year. Five of the eight distributors whose sales rose saw double-digit percentage increases.

Want to see how everyone else fared? Click here for the full 2017 Top 50 Distributors list. In the meantime, here's a few interesting stats and trends we saw in our analysis. Let us know if we missed any others.

• In all, 22 U.S. states and one Canadian province (Ontario) were headquarters to at least one promotional products distributor on the list. Illinois and New York tied for the lead with six top 50 distributors apiece. Ohio had five, California four and Wisconsin three. Eight states (Georgia, Maryland, Massachusetts, Michigan, Minnesota, Missouri, New Jersey and Washington) had two distributors on the list. Every region in the U.S. had at least one distributor on the list, but some regions were particularly well represented. The Midwest (21 distributors) and the Northeast (15) accounted for 72 percent of the Top 50.

• All told, the Top 50 distributors employed more than 10,000 people last year. American Solutions for Business led the way with 1,038 employees, while Fully Promoted (formerly EmbroidMe) employed 900. The smallest promotional products distributor on the list, by total employees, was e Group Inc., with 30 at its single location.

• Total promotional products sales for all unranked distributors (companies that submitted revenue figures but did not make the Top 50) were $337.2 million. These distributors employ 1,598 people and spanned the globe, with submissions from as far as Lima, Peru. Two distributors, 4imprint and Proforma, each posted individual sales totals greater than that $337.2 million number.

Proforma Founder Donates $5,000 to Next Generation of Entrepreneurial Business Leaders