With all the mergers and acquisitions happening in promo (and there were a lot of them last year), it can feel like the industry is getting smaller, not larger—contracting, not expanding. That’s true, in one sense. Every mega-distributor that forms technically reduces the number of individual companies operating in the space. But overall industry sales are growing. The pie is getting larger. And the most creative, innovative and forward-thinking distributor companies are snapping up the extra slices.

That’s why, as the rest of the industry consolidates, our Top Distributors list is expanding. We wanted to make it less about the big companies at the top (though it's certainly about them) and more about the big picture—a better, more complete snapshot of the industry’s best companies. So, instead of the Top 50, we compiled the Top 65. We brought back several notable companies we had trouble tracking down for previous installments of the list. We collected more information for each distributor, including percentage of hard goods versus apparel sales and a listing of top vertical markets. Oh, and we added a Top 30 Fastest Growing Distributors list,  opening the door for companies of all sizes to showcase their sales success.

You’ll find all that and more in our full 2019 Top Distributors list, which you can download here. (It's free!) For an overview of the stats and trends we saw while compiling the list, keep reading. 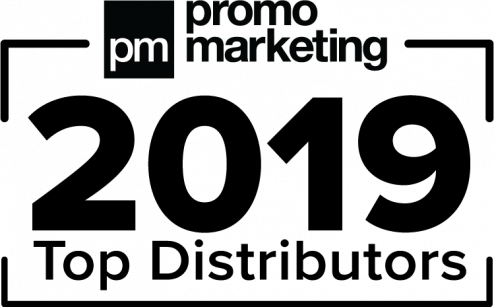 According to our data, the Top 65 Distributors totaled $6.24 billion in gross revenue. Since we expanded to a larger number  of distributors this year, we can’t compare that number directly to last year’s list, which numbered 50 companies. But this  year’s Top 50 alone totaled $5.96 billion, up from last year’s $5.03 billion. We should note that part of that nearly billion-dollar increase is due to the return of several large distributors absent from last year’s list, including Safeguard/Deluxe Corp. (No. 13), Fully Promoted (EmbroidMe) (No. 16) and Positive Promotions Inc. (No. 19), among others. But the majority of the sales growth was the result of a strong all-around year for the promo industry.

In all, 50 of our Top 65 Distributors grew their sales from 2017 to 2018, with 25 posting at least double-digit percentage growth. Twelve of those companies grew by 20 percent or more. The largest percentage sales increase belonged to Corporate Imaging Concepts (93.02 percent), whose acquisition of eCompanyStore helped it nearly double its overall promotional products revenue from 2017 to 2018. HALO Branded Solutions had the second largest increase (45.43 percent), also helped by several key acquisitions , followed by Kotis Design (35.29 percent), Touchstone (28.57 percent) and The Icebox-Cool Stuff (28 percent). The largest gross revenue increase belonged to HALO, which grew sales by $189 million, followed by 4imprint ($106.5 million), BDA Inc. ($90.5 million), Corporate Imaging Concepts ($40 million) and Geiger ($25.1 million).

This year’s top 10 companies remained almost unchanged from our 2018 list, with a few minor shakeups. For one, iPROMOTEu jumped two spots from No. 11 last year to No. 9 this year, bumping AIA Corporation down one spot to No. 10 and American Solutions for Business from No. 10 to No. 11. BDA Inc. jumped from No. 4 to No. 3, while IMS (Integrated Merchandising Solutions) moved from No. 7 to No. 6. The top 10 distributors alone combined for $3.4 billion in promotional products revenue, up from $2.9 billion last year.

The return of those large distributors we mentioned did impact the year-to-year rankings for the rest of the list, with a number of companies posting significant revenue gains but sliding a few spots as new additions to the list slotted in ahead. For example, despite growing sales by more than 35 percent, Kotis Design ranked No. 34, its same position from last year’s list. Touchstone grew sales by more than 28 percent and slid from No. 33 last year to No. 35 this year. This effect can be seen throughout most of the list, so we suggest not putting much stock in rankings changes for this installment—though there were some notable risers. The Icebox-Cool Stuff jumped five spots from No. 47 last year to No. 42 this year, while Smart Source moved from No. 46 to No. 43 and HDS Marketing rose from No. 50 to No. 45.

• The average split of hard goods versus apparel sales for the Top 65 Distributors was 62 percent to 37 percent.

• Of the 66 principal officers listed (Proforma listed two) for the Top 65 Distributors, 54 were men and 12 were women.

• In all, 24 U.S. states and one Canadian province (Ontario) appeared on our list as headquarters to at least one Top 65 Distributor. Ohio and Illinois led with seven distributors apiece, followed by Minnesota and California with five apiece. New York, Maryland and Georgia each had four. Nine states had a single distributor each.

• A few cities appeared multiple times on the list. Los Angeles was home to three Top Distributors, while New York, Dallas and St. Louis were each home to two.

• All four major regions of the U.S. had at least one distributor on the list. The midwest led the way again with 27 companies in eight states. The northeast had 16 companies in seven states, while the south had 13 in six. The west brought up the rear once again, with nine companies in three states.

For more stats and analysis, the complete ranking, profiles of some of the year's top promotional products distributors and more, download the full list of 2019 Top Distributors List here.