In the first few days of the coronavirus pandemic in the U.S., when the stay-at-home orders started to drop, businesses abruptly shut down and things got especially chaotic, we had to make a choice: move ahead with our annual Top Distributors list and celebrate the successes of a simpler time, or bag the whole thing and fill these pages with something else. It was a unanimous choice from the Promo Marketing staff—the list would go on. After months of planning, outreach, emails, phone calls, spreadsheets, more emails, meetings and mild profanity, we can safely say it was the right choice.

The 2020 list is maybe the one we’re most proud of to date (and we’ve been doing this a long time). Last year, we expanded our usual Top 50 Distributors list to include 65 industry companies, with plans to build out an even bigger list for 2020. Given the circumstances and the way things played out, we scrapped those plans and went back to a Top 50, which, to be honest, has a better ring to it anyway. And, considering we weren’t even sure this list would come together at all, we’re pretty thrilled at how it came out—and even more thrilled that so many industry companies, while facing the most adversity and uncertainty they’ve ever experienced, showed up, eager to participate. This list, for all involved, was a labor of love.

It’s a testament to these distributor companies and the strength of the people behind them. And, in a weird way, it’s a reminder of how creative and resourceful promo businesses are. After all, much of the challenge in assembling this list came down to companies being so busy with PPE orders that they needed a little extra reminding to submit their Top Distributors numbers on time. Those sales won’t be reflected until next year’s list, which, obviously, will be very different. So, until then, let’s talk 2020.

There was also a noticeable slowdown in consolidation among distributor companies. What would have been last year’s biggest move—BDA’s acquisition of BrandVia—was called off shorty after it was announced, over unresolved terms. HALO Branded Solutions acquired Axis Promotions in a move with major implications for the 2020 list, but that happened at the beginning of 2020, not in 2019. Geiger made several smaller acquisitions, notably on the U.K. side, and Genumark acquired Rightsleeve. That was, essentially, it, at least as far as the list is concerned. Compared to 2018, when HALO alone acquired four former Top 50 distributors, it was quiet.

It was not quiet, however, on the tech front. When asked what major industry trend or issue (non-coronavirus) they were watching closely, every distributor we spoke to for our Distributor Profiles (see the full list) mentioned technology in some form. Most of them said investing in tech played a pivotal role in their recent success, and it’s increasingly clear that robust technological capabilities—or lack thereof—are fast becoming the differentiating factor separating the top industry companies and the rest of the pack.

And, as you’ll see, it was a good year for those top companies. Promotional products sales for 2019 were up almost across the board, though the distribution across companies was somewhat different. While several distributors posted big year-over-year gains (see Fastest Growing section of the full list), growth among the true heavyweights was more evenly spread. There was also one newcomer to the list, with Brand Makers making its Top Distributors debut at No. 48.

That’s the macro stuff. For more stats and analysis and a breakdown of the numbers and trends, keep reading. Or, download the 2020 Top Distributors list here to see the full ranking. As always, we hope this feature provides a good snapshot of the promo industry overall—at least, as it was in 2019. 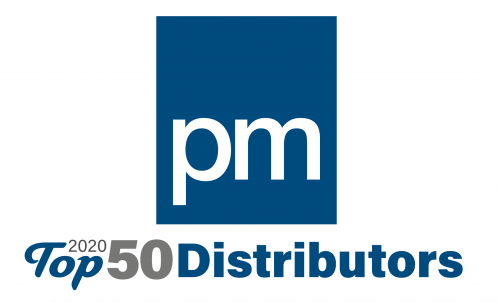 Overall, 44 of this year’s Top 50 distributors (88 percent) grew sales over the prior year. That compares favorably to last year, where 50 of that list’s Top 65 distributors (77 percent) grew sales. This year, 10 Top 50 companies grew by 15 percent or more, while six grew by 20 percent or more. That seems to indicate that sales growth in 2019 was spread more evenly throughout the list than it was in 2018, where 12 companies grew by 20 percent or more and major acquisitions and mergers drove some of the largest individual company sales growth. Average growth for the Top 50 was 7.75 percent.

For the 2020 list, Overture Promotions had the largest percentage sales increase at 34.79 percent, followed by Proforma (32.25 percent), HALO Branded Solutions (30.08 percent), Leaderpromos (25.88 percent) and Brand Makers (23.31 percent). The largest total sales increase once again belonged to HALO, which grew promo sales by $182 million over the prior year, followed by 4imprint ($124.7 million) and Proforma ($122.2 million). Contributing significantly to HALO’s growth was its acquisition of Axis Promotions, itself a top 30 distributor last year with $53.7 million in 2018 sales.

This year’s top 10 also looks slightly different than last year’s. With DiscountMugs.com, last year’s No. 7 company, not reporting for 2020, American Solutions for Business (ASB) climbed back into the top 10 after placing No. 11 last year. The company would have cracked the top 10 anyway, as it jumped three spots to finish at No. 8 and broke the $200 million mark in 2019 promo sales. The rest of the top 10 companies were the same as last year’s, but with some notable changes in the order. Proforma, for example, overtook Bensussen Deutsch & Associates (BDA) to finish No. 3, while AIA Corporation jumped from No. 10 in 2019 to No. 7 this year.

Elsewhere on the list, some other significant jumps took place. Leaderpromos made a massive 15-spot leap from No. 48 last year to No. 33 this year. Eagle Promotions moved up 11 spots from No. 46 to No. 35. Goldner Associates Inc. jumped nine spots, while Image Source and Quality Resource Group (QRG) each moved up eight spots. Three companies made jumps of seven spots. Some of these jumps, especially further down the list, are partially the result of gaps left by a handful of distributors that did not return for this year. But many of them were the result of naturally strong sales growth. Four of the companies ranked in the 41-50 range, for example, had double-digit percentage sales increases, again illustrating solid growth throughout the Top 50.

• The average split of hard goods versus apparel sales for the Top 50 Distributors was 61.8 percent to 38.2 percent, matching last year’s split almost identically. Factoring in all data submitted for this year’s list (including distributors that did not make the list), the numbers change slightly but remain almost fully in line, with a 60.8 percent to 39.2 percent split.

• The top five vertical markets for distributors on our list were Health Care (listed 27 times), Financial (listed 21 times), Tech (listed 17 times), Manufacturing (listed 16 times) and Retail (listed 14 times). It will be interesting to see how top verticals change in next year’s installment of the list due to market impacts related to the coronavirus. The Health and Financial verticals seem a safe bet to remain strong relative to others, while Retail, Education (listed 12 times) and Hospitality (listed eight times) seem likely to regress.

• Of the 53 principal officers listed for the Top 50 Distributors (three companies listed more than one principal), 45 were men and 8 were women. That’s a split of 85 percent versus 15 percent, roughly in line with last year’s split for the expanded Top 65 list (83 percent versus 17 percent).

For more stats and analysis, the complete ranking, profiles of some of the year's top promotional products distributors and more, download the full list of 2020 Top Distributors List here.