For many distributors, the coronavirus pandemic has been a mixed bag of challenges and opportunities. There have been shipping delays, inventory issues, production problems, price increases and staffing shortages. But that didn’t stop distributors from finding different ways to connect through kitting, signage and technology. Though demand has since leveled out (and risen again this year) PPE also had a moment and, for some, it was the lifeline that allowed them to close deals instead of doors. All of that helped shape our newly combined (and expanded!) 2021 Top 75 Distributors list.

Of the top 75 distributors who reported annual sales this year:

Those who have been tracking our respective lists will recognize the names that comprise our top five, but keeping with the theme of 2020, there are surprises. HALO Branded Solutions reported a small decrease in sales (2.71%), but its total revenue was enough to bump 4imprint Inc., which reported a 34.94% decrease in sales, out of the No. 1 spot. Proforma and Bensussen Deutsch & Associates LLC (BDA) maintained their ranks, and rounding out the top five was American Solutions for Business, which enjoyed an 18.22% jump in revenue. Taylor Communications, which occupied the fifth spot on the 2020 list, opted to submit financial data only for its promotional arm, Taylor Promotional Products.

There were other exciting developments surrounding this year’s list. Please welcome newcomers Helm (No. 25), Match-Up Promotions (No. 43) and Something Inked (No. 51), along with two companies that returned after missing a year, G&G Outfitters Inc. (No. 22) and Zagwear Inc. (No. 52).

Independent product sectors were down across the board—partially the result of gaps left by a handful of distributors who did not return for the list this year. Additionally, not all distributors disclose this information, which could skew findings. Promotional Hard Goods put forth the strongest showing with $1.21 billion. Packaging, which debuted on Print+Promo’s 2020 product rankings, climbed to $67.06 million (2020: $51.9 million). And the “Other” category reached $78.83 million (2020: $65.4 million).

Keep reading for more stats and analysis, or download the 2021 Top Distributors list here to see the full Top 75 ranking. As always, we hope this feature provides a good snapshot of the print and promo industry overall. 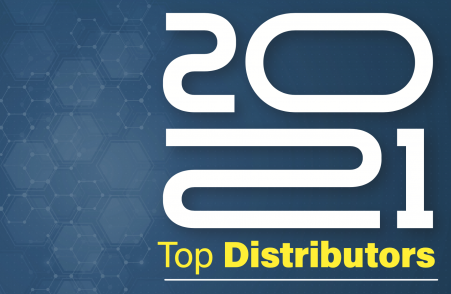 • The top five vertical markets for distributors on our list remained consistent with 2020’s findings. Not surprisingly, Health Care was the most common top vertical (listed 37 times). It was followed by Financial (listed 26 times), Retail and Technology (tied with 20 listings each), and Manufacturing (listed 18 times). As we predicted last year, certain verticals like Hospitality and Education had a slower recovery rate, but they still managed to collect 14 listings between the two.

• Of the 78 principal officers listed for the Top 75 Distributors (three companies listed more than one principal), 66 were men and 12 were women. That’s a split of 85% versus 15%, in line with last year’s breakdown of the shortened Top 50 list.

• In all, 25 U.S. states and one Canadian province (Ontario) were headquarters to at least one Top 75 distributor. Illinois led the way with nine distributors calling it home, closely followed by Ohio with eight. Maryland and Minnesota each had six. Fourteen other states appeared at least twice on the list, leaving eight states with a single top distributor each.

• All four major regions of the U.S. (Northeast, South, Midwest and West) had at least one distributor on the list.

For more stats and analysis, the complete ranking, profiles of some of the year's top promotional products distributors and more, download the full list of 2021 Top Distributors List here.

Your 1:1 Review With Yourself
Comments
The Top Lists