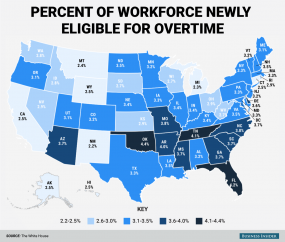 This is a map showing the percent of the workforce that will be eligible for overtime under the new rule. (Image via Business Insider)

In May, we reported on the updated overtime pay regulations that will go in effect Dec. 1. The new rule will extend overtime pay protections to more than 4 million workers, and a lot of states aren't happy. The new rule's biggest hurdle is that salaried employees making less than $47,476 automatically will quality for overtime pay when they work more than 40 hours a week.

Officials from 21 states sued the U.S. Department of Labor last week to block the overtime rule, deeming the measure a federal overreach by the Obama administration, according to the The Washington Post.

Adam Laxalt, Nevada attorney general, filed the lawsuit at a U.S. District Court in Texas, in an effort to block the rule before it takes effect. Laxalt feels that the new policy burdens private and public sectors and will force layoffs.

"This rule, pushed by distant bureaucrats in D.C., tramples on state and local government budgets, forcing states to shift money from other important programs to balance their budgets, including programs intended to protect the very families that purportedly benefit from such federal overreach," he said, according to The Washington Post.

Simultaneously, the U.S. Chamber of Commerce and more than 50 other business groups also took legal action against the new law. The business groups claim the changes put too much pressure on businesses as states recover from the recession.

Thomas Perez, U.S. Secretary of Labor, rebutted the negative reactions to the laws.

"The overtime rule is designed to restore the intent of the Fair Labor Standards Act, the crown jewel of worker protections in the United States," he said. "I look forward to vigorously defending our efforts to give more hardworking people a meaningful chance to get by."

For now, it's difficult to predict which way the suit will go. However, Crain's Detroit Business suggested businesses should be ready for the Dec. 1 implementation.