That is true. But no, seriously, this was better. Here's why:

This was the view from the top of the guided hike:

Just taking in a little scenery at the Power House #pmpowermeetings in Scottsdale. NBD. 😎 pic.twitter.com/J0tNTqJYrY

That's a little better than a conference room or convention center, eh? The hike, led by guide Rico Riley, the single coolest human being we've ever met, was off-site, but you didn't have to go far for ridiculous vistas. Here's one from the grounds of The Boulders Resort and Spa, site of the Power House event:

If hiking isn't your speed, the Power House Power Meeting also offered a full spa experience, so attendees could relax with massages and mani-pedis. A certain Promo Marketing editor, of course, was assigned to rock climbing, which is the opposite of relaxing and took place not on a prefabricated rock wall but on an actual, gigantic, near vertical boulder.

Here's the rock-climbing crew post climb, pretending it was no big deal:

And, of course, there was golf. Golf Digest named The Boulders the Southwest's best golf resort for 2017, so we weren't going to let anyone miss out on that. These greens, though:

We saw plenty of cool lizards and birds, and heard tales of coyotes, bobcats and rattlesnakes aplenty, if that's your thing. We didn't get up close and personal with any of those animals, but we did get to hang out with Max, the very best boy:

"Max and I had such a great experience in Arizona," she said. "Great suppliers, old and new. Factories that you think you know very well always surprise you with new and innovative products, such as Paramount Apparel International Inc. And for the brand new, jaw dropping products, you brought in Aiia International."

Oh, yes, we do. Because Delta Apparel was serving up mimosas all day every day:

This is the big one. Power Meetings are all about connecting suppliers and distributors in ways that typically aren't possible, but Power House upped the ante. It was smaller than a typical Power Meeting, so there were more chances for real conversations (business or otherwise) with everyone in attendance. And the healthy slate of activities created opportunities for deeper networking—clinging to a 78-foot rock wall really brings people together, you know?

"I attended the Power House event in Scottsdale and it was amazing," said John King, owner of AIA-LogoMotions, Snoqualmie, Wash. "The power of one-on-one meetings with suppliers for project-driven discussions, and the opportunity for relationship-building during the optional recreational activities, was invaluable. I have opened up some new supplier relationships that will help me to serve my clients better and build my business."

Here's some of those one-on-one meetings in action: 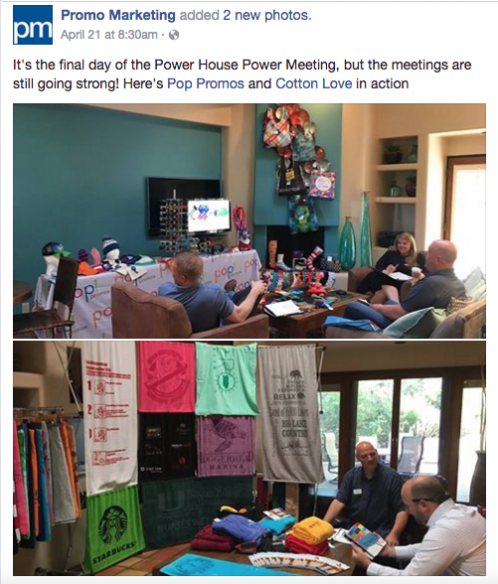 "The Power House event was held in a five star resort and was first class—first class distributors, first class suppliers!" said Jim McCollough, vice president of sales for Edwards Garment, Kalamazoo, Mich. "Time to invest meeting, networking and getting to know one another. Only great things can happen with that formula."

For information on how you can attend a future Power Meeting event, contact Mike Cooper at mcooper@napco.com or 215-238-5434.