5 Ways to Win Big with Promotional Products this Election Year 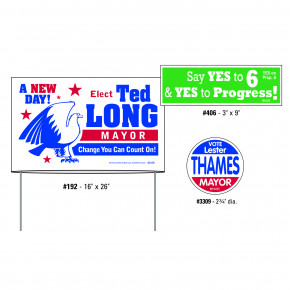 Years ago, P. Diddy asked us (and millions of others) to pledge to “Rock the Vote”—and we took it to heart. We vote in every election, whether it’s to elect our local school board representatives or the next president of the United States.

This isn’t the case for everyone, though.

Still, presidential election years historically have the highest voter turnout. According to FairVote, a nonpartisan nonprofit organization focused on electoral reform in the U.S., roughly 60 percent of the voting-eligible population has voted in recent presidential election years, while only around 40 percent has voted in midterm elections, with an even greater drop-off of voters in odd year and local elections.

This is similarly reflected in promotional products usage for campaigns—so it’s a good year to get in the game. “We generally see a much bigger increase [in sales] in presidential election years because there is more voter turnout, so the stakes are higher for local and state candidates, as well,” said Terry McGuire, senior vice president of marketing for Sterling, Illinois-based distributor HALO Branded Solutions.

Whether it’s a postcard from a candidate asking for your vote, a handout enumerating the candidate’s platform or a pin that shows the voter’s support for the candidate, campaigns and promotional products go hand-in-hand. We may not yet know which names will be on the ballot come November, but we do know promotional products are a sure bet for ushering campaigns—and your company sales—to the next level.

Read on for five ways to come out with a win this election year—and years to follow.

From buttons to bumper stickers, tried-and-true promotional products in the election sector are near-requirements for campaigns. Not only can voters use them to show support for their preferred candidates, but these products are fundamental to establishing name recognition, which can be half the battle of winning the seat—especially for midterm and local elections.

“There are three products that every campaign needs, that we provide on a daily basis: yard signs, bumper stickers and lapel stickers,” said Carl Gerlach, vice president of marketing for Lenexa, Kansas-based supplier Gill Studios Inc.

Each product has its purpose—and its time—in the election process. “The lapel stickers are generally required earlier in a campaign, as these can be used at fundraisers and events for constituents to show support for their candidate,” Gerlach explained. “[Bumper stickers] can be passed out at events or mailed to donors as a ‘thank you’ gift.”

But just because these items are campaign must-haves doesn’t mean they don’t require close attention.

Take yard signs, for instance. “Signs are usually not used until 60 days before the election, because of local legislation,” Gerlach noted, suggesting distributors check with the specific towns and cities in candidates’ target areas to learn about individual timing and size restrictions. With this knowledge, they can present themselves as the source of authority on the matter—and recommend the best product for the candidate’s needs.

2. DETERMINE WHEN TO FUNDRAISE, WHEN TO GIVE AWAY

But that’s the point. Promotional products get people talking. There’s just one catch: These products aren’t being given away. They’re on sale in the candidates’ webstores—and the proceeds go toward the respective candidate’s campaign.

“This is the [major] growth area in promotional products use by political candidates,” McGuire said. “In the last few election cycles, we’ve seen a nice increase in apparel, headwear and nicer hard goods, reflecting the shift in the use [of] promotional products as awareness items to fundraising items for candidates.”

But this trend hasn’t entered all aspects of the market. “Most national promotions use items as fundraisers, whereas local promotion leans more toward promotional products as giveaways and name-recognition advertising,” McGuire explained.

If the candidate you’re working with wins an election, it’s cause for celebration. “If they win their primary election, they will run again in the general election,” Gerlach said. “If they win an elected position, generally they run for election again.” In short, the more elections candidates participate in, the more opportunities you have to work with them.

“Just like death and taxes, there are always elections, so it’s a great market for repeat business,” Gerlach continued. “We have many candidates that we’ve printed signs or bumper stickers [for] annually for decades.”

But, as Gerlach explained, you’ll need to put in the time and effort to win back the candidate’s business. (And, it doesn’t hurt to play up your previous success together.) “The best way to ensure a repeat order is to contact the candidate several months before the campaign gets underway and offer to help once again provide all the election materials that you previously provided that got them elected the first time,” he said.

So, remember to make friends—and foster those friendships. “On the local level, many orders go to a distributor who has a personal relationship or connection with a candidate,” Gerlach said.

Yes, it would be great if your candidates won their elections—remember, re-elections mean repeated sales—but let’s be real: Not everyone is going to win.

That’s just one reason to get your payment in advance. “We require pre-payment on all political orders because if a candidate loses, you have a difficult time collecting,” McGuire said.

“Election materials are mostly funded by donations, so unlike other markets, 100 percent pre-payment is generally preferred,” Gerlach seconded.

Again, knowing the intricacies of the market will help you in the long run. “Every level of government has [its] own procurement intricacies, so it is best to identify the payment process and agree to it before an order is placed if you’re dealing with a government agency,” McGuire recommended.

With the White House up for grabs in the 2016 election, voter interest and turnout will be higher than in the last three years—and the election market for promotional products reflects that. As McGuire explained earlier, higher interest ups the ante for local candidates, as well. More voters mean more individuals who need to know the candidates names once they walk into that voting booth.

And while voter turnout may be lower in off-year elections, someone is always running for something. Especially at the local level, campaigns need the name recognition and support promotional products provide.

But as we’ve seen with local restrictions on yard signs and a campaign’s payment process, to be successful in the election sector, you need to walk the walk and talk the talk. “This market has its own lingo, its own rules and they are looking for expertise that’s hard to fake,” Gerlach said. “Educating yourself on your local market and legislation regarding restrictions for signage and other items is important. Start by getting up to speed on the market, then determine what your selling advantage is going to be: price, production time, art expertise, etc.”