Here Are a $5,000 Decorated Beer Mug and Wine Glass Made Out of Cheese

2017 has yielded numerous significant popular culture anniversaries, but it has definitely not found itself falling short in marking notable historical occurrences, too. Often lost in the latter because of the far-reaching severity that the other events hold, the centennial celebration of Finland’s declaration of independence from the Russian Soviet Federative Socialist Republic nonetheless has bred immense pride among inhabitants of the Nordic land. Eager to acknowledge the daring nature of the breakaway individuals who established the desired autonomy and to prove likewise venturesome, albeit on a far less global scale, Finlandia last week issued a beer mug and wine glass made from cheese, guaranteeing revelers not only a novel way to celebrate but also a means to up their calcium intake.

The Parsippany, N.J.-based company operates as a subsidiary of Helsinki’s Valio Ltd., which bills the chief component of its products as “the purest milk in the world.” The Garden State entity, holding that its “master craftsmen are relentless in the pursuit of taste perfection with no room for shortcuts or compromise,” proved their hires’ ingenuity December 6, relying on food sculptors Jim Victor and Marie Pelton to form a gruyere beer mug and a gouda wine glass. Those who fought for Finland’s freedom paid for their efforts through blood, sweat and tears, and, 100 years later, admirers of their diligence and cheese lovers alike parted with $5,000 to secure the one-day-only promotional products that even bore Finland’s flag. 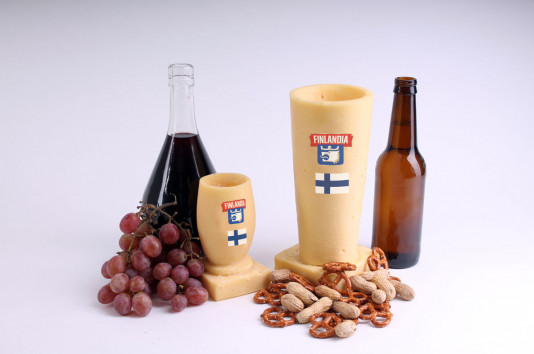 We have all heard about having our cake and eating it, too, so these creations gave Finlandia poetic license to replace the baked good with “drinkware.” Per the Canadian Diary Information Centre, among European Union country dwellers, only Danes outdo Finns as cheese consumers, so it made perfect sense for Finlandia to rely on the cultural staple as an anniversary tie-in.

“To celebrate the 100th anniversary of Finland, we wanted to create something symbolic that is a gesture to the dozens of Finnish family-owned farms who have dedicated over 110 years of passion and dedication to making some of the world’s very best cheeses,” Marcie Foster, Finlandia’s director of marketing and brand development, said.

In doing so, the award-winning company offered not only 16- and eight-ounce holders but also a reminder that no matter how many textbooks and online sources include accounts of an event, executing a unique idea that pays homage to sacrifices and successes can really resonate with an audience. With respect to Finlandia, it looks as if the cheese-centric commemoration will go a long “whey” toward helping it spread its brand’s name. In a field where innovation is key, I think we should all drink to this promotional concept’s implementation.