Thanks to having claimed three Stanley Cup championships since 2010 and employing standouts such as right winger Patrick Kane and center Jonathan Toews, the Chicago Blackhawks have no trouble drawing large crowds to the United Center. Along with winning regard for their style of play, they do not struggle to reap renown for their attire, with the Western Conference skaters emerging the victor in NHL.com’s quest to name the great uniform in hockey history.

The threads from the proud franchise, whose players have sipped from Lord Stanley’s Cup six times and have celebrated 16 division championships, emerged from a list that included 100 uniforms, an apt total considering that the search came in conjunction with the league’s recently completely centennial celebration. An “Original Six” organization that debuted in 1926, the Illinois club stood out thanks to the outfit its athletes have donned since 1959. The jersey, which serves as the obvious eye catcher, has not escaped backlash over the years, but enough members of the six-million-strong voter pool looked beyond considerations of cultural insensitivity to give the Blackhawks the title. 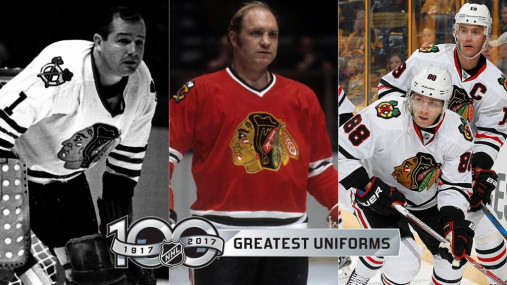 The Chicago Blackhawks received the nod for the uniforms that they have worn since 1959. (Image via NHL.com)

Even before inspecting the list of the top 25 finishers, I had hoped fans would have seen the Hartford Whalers’ regalia as a worthy selection, and they did indeed, helping the team that has since become the Carolina Hurricanes to swim into second place. A few franchises, including the Blackhawks, appeared more than once, leaving my Philadelphia Flyers-loving self to pine when I noticed the Orange and Black had not earned a top 25 nod. I have long held that NHL referees have something against the Broad Street Bullies. Could the game’s overall fan base have the same reservations? All feelings of persecution aside, I have very few critiques of the choices, which the hockey-happy voters made between November 28 and December 31. At least the Pittsburgh Penguins did not skate off with any merit either.

The Blackhawks, despite being just above a .500 squad in their franchise’s 91 seasons, have achieved iconic status and have given the game some of its greatest stars, with 14 players who appear on the NHL’s list of all-time greats having hit the ice for the club, including Hall of Famers Tony Esposito, Bobby Hull and Stan Mikita. NHL.com has not released a voting breakdown, but regardless of that explanation, it is pretty impressive that the poll netted six million responses. Hockey, sadly for some (perhaps yours truly included), is never going to eclipse the popularity of baseball, basketball and football in the United States, but considering that the sport has such deep Canadian roots, the Blackhawks should take pride in having fended off many clubs who ply their trades to the north, including the league’s most distinguished franchise, the Montreal Canadiens. Regardless of geography, though, the whole voting process is more of a reflection of the power of sporting apparel, a phenomenon whose appeal is something that nobody ever figures to be able to put on ice.