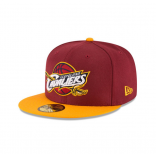 New Era announced that it is the exclusive headwear provider for the NBA. (Image via Twitter)

As the 2016-17 NBA season begins, the league announced that it has inked a deal with New Era, making the company the official authentic headwear provider of the NBA, WNBA and NBA Development League.

According to a statement to SLAM, New Era exclusively will produce caps for NBA events, including the NBA Draft, Conference Finals and NBA Finals.

"We've been a partner of the NBA for many years, and are excited for the opportunity to continue to work with such a storied league and its outstanding teams," Chris Koch, president and CEO of New Era, said in the statement. "We're looking forward to using team and league logos to bring unique designs and styles to the market for both players and fans."

"We're very excited to grow our relationship with New Era and explore new ways to share premium product with our fans," Lisa Piken Koper, vice president of global partnerships for the NBA, said in the statement. "The NBA Draft and Finals will reflect our refreshed approach to the category."