A Distributor Remembers an NFL Promotion That Made a Difference

When a promotional campaign gets its intended brand impressions for the end-buyer, pretty much any distributor would say it’s a success. But when a promotion can do some real good in the world and create a positive affect for people, it’s even more special. Greg Schwartz, vice president of sales for Hot Cards, Cleveland, had an opportunity to combine his love of sports and passion for helping his community with a recent promotion.

Promo Marketing: Can you tell us about a promotion that you thought was one of your best?

Greg Schwartz: The client is the Cleveland Browns. … They come to me for a lot of their promotional apparel and promo signage, and this happened to be in the signage category. They needed us to basically help them do a couple banners for breast cancer awareness week, which as you know, the NFL tributes a whole week to, and every team wears the pink and does a bunch of banners. Growing up as a big sports fan, [it was neat] not only having the Browns as a client, but also to play a part in something that is beyond me and is very impactful awareness that we need to bring.

I’ve got a lot of friends and family who have been impacted by this, as most people have, and so for them to come to me to help produce something like this was just so impactful for me, and meaningful. And I was able to see it on TV, and just see the thousands and thousands of fans that see the banners on the field. And it goes from me to the client to thousands and thousands of fans to be able to help support such an important week for my client and, obviously, for breast cancer awareness. It was just one of the most impactful things that I’ve done in my career that wasn’t about the dollars and cents on the project.

It was more about how it impacted others out there, and spread the word that we do need to bring awareness to breast cancer. 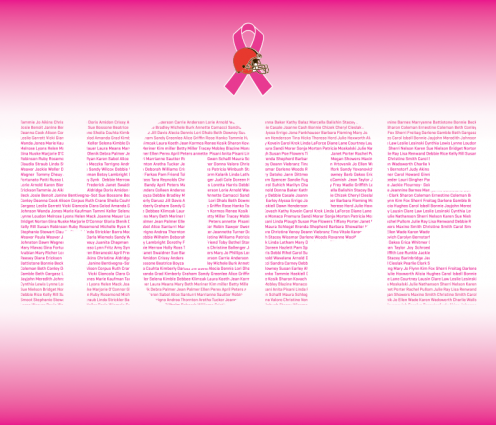 The banner used by the Cleveland Browns

PM: What did you like about the banners themselves?

GS: In terms of the item, I liked that we we were able to take something very simple like a banner, and we were able to do a lot of additions to it. We added handles to the bottom so that it could be stretched out. It was two 30x20' banners, so these are massive banners that everybody in the whole stadium played a part in seeing and creating a tribute to.

That’s definitely my favorite part, being able to take something simple and make it that much more impactful, and even be able to add a little bit of an addition to the normal banners that we do—sew-on handles on the bottom so people who work there can hold onto it and stretch it out, so that more and more people could see it from the stands.

PM: What advice would you give a distributor looking to do a similar promotion?

GS: I would go to your client and ask them what type of events or what type of outreach they do in the community. I’ve got a lot of clients that are always doing community outreach stuff. So if you can play a part in that, then you can kind of extend yourself through your client to make an impact in the world and not just make it about the sale of the day or just trying to get the next big project from the client.

Those types of projects, for me, are what gets me out of bed every day and puts a smile on my face—to be able to be there for my client, not only for the regular stuff but also for the stuff that really can impact. And then you’ll get a lot of good feedback from your clients, and they’ll remember you more. They’ll come back to you.

PM: What challenges did you run into with this promotion?

GS: Not too many roadblocks or hurdles other than that they wanted to possibly change the artwork at the last second, which a lot of us distributors go through. At the end of the day, they went with keeping the artwork that we originally did. There really weren’t any major hurdles on something like this.

I do these types of custom projects all day every day for my clients, so they know that they can come to me even if it’s a little outside the norm for the print and promo distributors.