The American Civil Liberties Union won a Supreme Court decision last week and celebrated just as anyone would: by releasing a branded T-shirt commemorating the victory.

The case is best summarized, naturally, by the T-shirt's item description on the ACLU online store (caution: language):

In a case from Schuylkill County, Pennsylvania, a then 14-year-old student and cheerleader at Mahanoy Area High School in Pennsylvania, posted on the social media platform, Snapchat. One of her cheerleading coaches saw the post, which used an expletive, and suspended her from the team for a year—even though she had posted on a weekend and off school property. We argued before the U.S. Supreme Court that public school students should have the right to freely express themselves when they are off campus and away from school activities. We won this case on June 23rd.

"While you probably shouldn't wear this to school, thanks to our victory, the government definitely can't punish you for posting it to your Snapchat," the description adds.

The short-sleeve T-shirt comes in beige and in unisex sizing. It features the student's expletive-laden rant on the front and an ACLU logo on the sleeve: 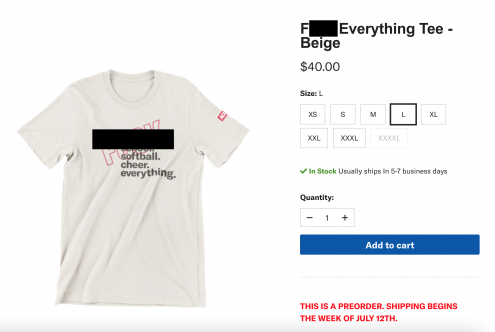 The listing for the ACLU T-shirt with expletives tastefully redacted. | Credit: ACLU

The ACLU is taking preorders until July 12.

Last week, WNEP, an ABC affiliate based in Pennsylvania, reported that the shirts were almost sold out, though it appears the ACLU has made more available. (A screenshot from WNEP shows all sizes sold out, but the ACLU store is currently showing all sizes in stock except 4XL.)

That's impressive considering the $40 price tag. The shirt also generated some significant buzz on social media. On Instagram, a post announcing the shirt has 38,000 likes. A second post highlighting the shirt, from a few days later, has over 100,000 likes.

The two posts combined for almost 2,500 comments, some expressing excitement and support, others questioning the decision.

Regardless, it's a savvy move by the ACLU and a prime example of how nonprofit organizations in particular can turn newsworthy events into merchandise that raises funds.