From a young age, we're taught to share. It's a lesson that follows us into adulthood, where we also embrace the mantra of "reduce, reuse, recycle." Sometimes those two join together, and people get the opportunity to pass down something that maybe they're finished using or want to move on from, but it's new and exciting to the recipient.

JCP Nordic, a Swedish ad agency, was in the rebranding process, but was left with a ton of promotional merchandise with the old brand identity. Rather than dump it all in a landfill, the company had a stroke of genius: It asked if anyone would want to adopt its old identity.

"Changing our visual identity meant that we suddenly had a lot of excess branded office supplies and so on, with our old logo on it," JCP Nordic CEO Øystein Tynning told Adweek. "At the same time, many companies worldwide struggle with their own visibility. Instead of just throwing everything away, we decided to donate it all to a business somewhere that would benefit from." 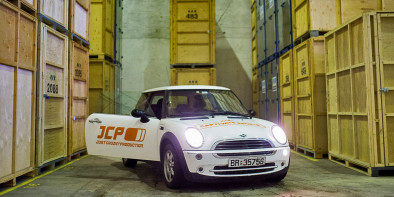 A Swedish ad agency donated its old branding and tons of promotional items, including a car, to a Romanian carwash. (Image via Adweek)

JCP Nordic took out a classified ad, searching for companies that might want to give their business an upgrade. After receiving about 400 requests from companies all over the world, the company settled on a carwash located outside of Bucharest, Romania.

"[The carwash owner] seemed like a genuinely nice guy, and when we found out his business had been struggling for some time, the decision was easy," Tynning said. "The way he greeted us, and the look on his face when we handed over the stuff, was definitely worth the long trip."

While the actual promotional products went to the carwash, and will no doubt benefit the business, this act of goodwill created a reciprocal relationship between JCP Nordic and the newly-christened JCP Carwash.

"Of course it feels nice to have helped another firm with a makeover, but we are also pleased to have found an original way to self-promote JCP," JCP Nordic's creative director Paul Little told Adweek. "We are in love with our new visual identity, and at the same time very happy that our previous one has received a revival in Romania, and a very worthy new owner."

Be the Hammer With OfficeMax Co-Founder Michael Feuer