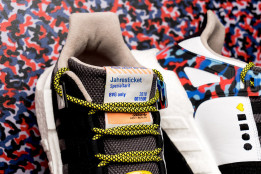 Oftentimes, a good promotion is built on the strength of a brand or on the stylishness of a product. People tend to judge value superficially, which is why a good design or recognizable name can help a brand to differentiate itself in a crowded market. Sometimes, however, a good promotion relies on the usefulness of the product a brand decides to put its name on. This kind of brand-product association can communicate reliability, not to mention the fact that a quality product will be used more frequently and for a longer period of time than a poor one, which means that a brand’s name and logo can garner maximum exposure.

While the shoes look incredibly cool, the savings are even cooler: a regular year’s pass costs 728€ ($893) while the sneakers cost only 180€ ($220). The label on the tongue of the shoe will double as a ticket, but there’s no crazy technology involved. Berlin’s transit system works on an honor system, with periodic security checks to make sure that riders have tickets with them. Anyone wearing the BVG-branded pair of Adidas will simply have to point out their shoes in order for them to pass as their ticket. This of course means that the rider will have to be wearing both shoes to ensure that they don’t try to share the pass with anyone else.

The combination of style and utility will ensure that lovers of public transportation and sneaker heads alike will want to get their hands on these shoes. In fact, it’s highly likely that the shoes have already sold out. Only 500 pairs were produced, and they went on sale Monday in Berlin, where one store apparently had people lined up in wait since Sunday. Talk about dedication.

Even though sneakers aren’t big in the promotional apparel industry, the important thing here is the lesson this Adidas collaboration holds for the promotional products industry: that products can both look good and do something useful. A creative and innovative promotion could make a big difference for a brand looking to gain recognition, and while there are definitely risks involved with stepping out on a limb for a promotion, the rewards can be much greater.

In the world of promotional apparel, this type of creative utility could be accomplished in a number of ways. For example, a clever use of smart apparel could, in the future, allow a piece of clothing to unlock a door. In a simpler but no less valuable manner, a piece of branded apparel, such as a hat, could allow a wearer to get a discount on a product or service an end-buyer offers. The possibilities are pretty much limitless, and it’s guaranteed that people will be even more willing to rep a brand they love if it means that they’ll get rewarded for doing so. (Shout out to Dunkin Donuts—seriously we’ll wear anything for your delicious, underrated coffee.)

Was that too desperate? Yeah, we know, we have a problem. We’re working on it.