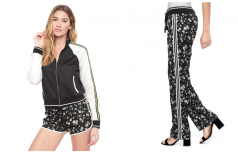 We've spent a lot of energy in the past ranting about attempts to trademark stripes. Maybe Adidas finally got the hint, since Law 360 is reporting that the company reached a settlement to end its trademark lawsuit against Juicy Couture over its "three-stripe" trademark.

Adidas filed a motion in Oregon federal court to dismiss the case, in which the company had said that Juicy's use of the stripes in its apparel was "a callous disregard for Adidas' trademark rights."

According to Law 360, the court filings did not reveal the terms of the settlement, and an attorney for Adidas declined to comment on the details of the agreement.

This was not Adidas' first attempt to protect its three-stripe design. Before suing Juicy Couture, the company took legal action against Puma, Marc Jacobs, Sears, Skechers and others.

Adidas came after Juicy Couture because it claimed the company signed an agreement in 2009 declaring it would not sell apparel with "parallel stripes along the sleeves and down the pants leg," but that the company went back on its own terms.

"Despite Juicy Couture's indisputable knowledge of Adidas' rights in the famous three-stripe mark—demonstrated by an agreement in which Juicy Couture acknowledged Adidas' rights in the mark and expressly undertook not to infringe the mark—recently began offering for sale apparel featuring confusingly similar imitations of Adidas' three-stripe mark," Adidas wrote at the time, according to Law 360. "Juicy Couture has shown a callous disregard for Adidas' trademark rights and for the 2009 agreement."

While Adidas is no longer fighting with Juicy Couture, it will continue its legal battle with Forever 21 who accused Adidas of being overly aggressive in its enforcement of the stripe design.