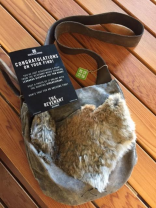 A film prop for "The Revenant"; Image via The Verge

A lot of movies have created clever promotional campaigns. Some install cryptic billboards in cities, some place messages around town on walls and others hand out memorable gifts.

"The Revenant"—a new film starring Leonardo DiCaprio as a fur trapper named Hugh Glass, who fights to survive the snowy wilderness—will use a promotional campaign that gives fans access to props, as long as they are willing to venture into the woods.

According to The Verge, 20th Century Fox teamed up with Geocaching.com and buried film props around the world, encouraging fans to find the items (listed as property of Hugh Glass). When users find items, which include tags congratulating them for their finds, they are supposed to upload a picture to Twitter using the hashtag #TheRevenant, and move the item to another challenging location for the next fan to find. It's a catch-and-release type of promotion (in theory, at least).

"We're excited to see 'The Revenant' props travel to extreme locations, face the unknown and survive the harsh winter wilderness," the promotional copy said, according to The Verge.

The information about the items was released with little fanfare in November 2015, and some already have started relocating the treasure.

Since these items, including leather bags and climbing ropes, are actual film props, they could sell for a high price on eBay, and some adventurers may not be inclined to just hide their treasures—opting instead to sell them online. However, 20th Century Fox asserted that the real reward of the promotion is the experience.

"Unless you choose to walk off with them," the promotional copy said. "But don't do that."