As retail spaces open back up, employees returning to their jobs are concerned that they’re in danger when working indoors, and also that they're putting customers potentially at risk if they are not wearing a mask themselves. To try to create across-the-board regulation, the American Apparel & Footwear Association (AAFA) sent a letter to President Trump asking for national face mask usage standards.

“Such usage standards, while based on medical guidance and promulgated nationally to avoid confusion, must be enforced locally,” the letter said, according to Just Style. 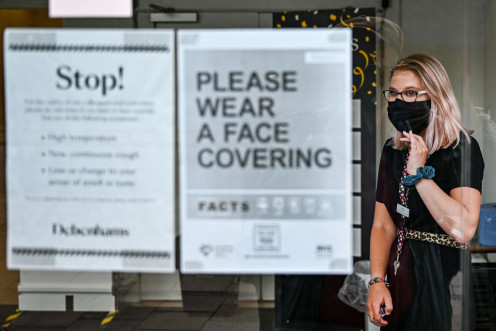 EDINBURGH, SCOTLAND - JULY 10: Members of the public wear face masks as they shop on Princess Street on July 10, 2020 in Edinburgh, Scotland. Wearing a face masks is now mandatory in shops across Scotland, people with specific medical conditions or disabilities and children under the age of five will be exempt. | Credit: Getty Images by Jeff J Mitchell

It’s that inconsistency across regions that causes problems. Where masks might be voluntary in one county or city, it’s mandatory in the next town. Lamar added that if the federal government implements a consistent standard, it could help stop the spread while allowing businesses to stay open.

This proposed rule obviously applies to the retail sector, but the implication for promotional products distributors is that more retail outlets would now be in the market for face masks. It would be a part of the uniform for employees, and stores could offer masks for customers who show up without one. If these were branded masks, customers who left with them would give the store some built-in logo visibility.

As Lamar pointed out, many apparel brands have incorporated face masks into their product offering as accessories, and that’s likely not going away any time soon. Providing branded face masks for businesses like restaurants, clothing stores and anywhere that employees have to help out customers in an enclosed space is a no-brainer for promotional distributors. They serve a need and solve an issue immediately (the business can better protect employees and customers, and it helps the general population), it’s something the public is looking for, and it is another place to potentially put a brand logo with long-lasting visibility.

Related story: A Guide to Face Shields: Promotional Viability, Proper Use and What Experts Are Saying