After Slow Start, the Gritty Promos Are Finally Coming

It's been quite a year for Philadelphia sports: the Eagles won the Super Bowl, the Sixers acquired Jimmy Butler, and "Creed 2" finally hit theaters. (Side note: It would be great if the Saint Joseph's University men's basketball team could get in on this brotherly love magic, but that's just this editor's totally biased opinion.)

While all those sports accolades are nothing to scoff at, the true Philadelphia sports Cinderella story is orange, scruffy and completely unexpected. When the Philadelphia Flyers initially unveiled their new mascot Gritty, the city practically revolted. But not even 72 hours later, the charismatic character was not only accepted into Philadelphia's mascot lineup, but unanimously chosen as the symbol of the city.

Just this weekend alone, he made several headlines, including one for a two-foot Cheese sculpture in his likeness and another for the most amazing half-court shot we've ever witnessed:

Gritty's ascension has been a surprise to us all. Even the Flyers seemed shocked at how quickly fans embraced him, which is probably why they've been slow to roll out Gritty merchandise. They did a T-shirt giveaway one night, and there are only a few Gritty items in the official NHL Flyers store.

So we did a little version of the Gritty happy dance when we heard that Gritty was finally getting much-deserved commemorative items in the form of three bobbleheads. According to the Philly Voice, the National Bobblehead Hall of Fame and Museum has revealed three different Gritty bobbleheads, and we're having a tough time picking a favorite. 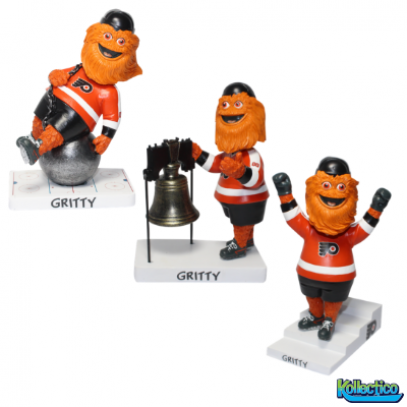 There's "Wrecking Ball" Gritty, an homage to his Miley Cyrus-inspired entrance at one of the Flyers' games. Then there's "Boxing Steps" Gritty, which is a reference to the beloved "Rocky" films. And then, of course, there's Liberty Bell Gritty, which speaks for itself.

Each bobblehead is currently available for pre-sale, and each runs for $40. The company is only making 500 of each, so we're sure these are going to become huge collector's items.

While we think it's great that Gritty is finally getting his own merchandise, we wish the team would start pumping out the promotional items, too. There's no reason there shouldn't be a bobblehead night on the Flyers' promotional schedule, and the team store could have more options available. Thus far, the fans have proven they can't get enough Gritty. So, let's go, Flyers. Give the people what they want.