Agency Trolls Trump With Merch Based on Anti-Trump McDonald's Tweet

It's so fascinating to live in an era where micro-moments immediately become merchandise. Even with the election cycle over, we're still seeing new politically motivated apparel every day.

McDonald's quickly deleted the tweet, and later explained an external source hacked the account. But, the tweet already made waves in the Twittersphere, and Austin, Texas-based agency Hunt, Gather decided to capitalize on the micro-moment, according to Adweek.

The new line, called "Supersize the Resistance," implements McDonald's branding for a line of merchandise, including T-shirts, hats and tote bags. The agency is donating all proceeds to Meals on Wheels, and the prices for the merch range from $18 to $25. 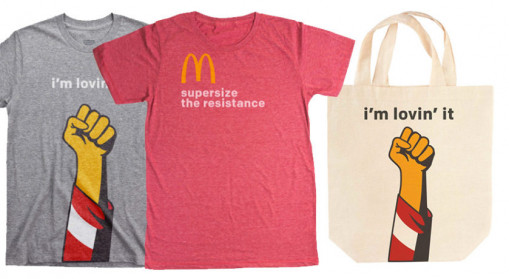 In terms of the inspiration behind the brand, Heather Beckel Luecke, account director for Hunt, Gather, provided some insight to Promo Marketing.

"We wanted to create something both timely and compelling based on the McDonald's hacked tweet, and we definitely wanted to do more than poke fun," she said. "We designed the site and the merchandise to serve a greater purpose. We're proud to have created an homage to an iconic brand that has been so well-received, and in the course of that raise money for a wonderful nonprofit which feeds and offers companionship to the elderly. To date, we'll be able to donate nearly $1,500 to Meals on Wheels."

There's no word on whether McDonald's has seen or commented on the products, though it'd be interesting to see what the company thinks given it denounced the original tweet. The legal ramifications are also a bit unclear, as some of the products use the McDonald's logo or stylized images relating to the fast food chain's mascots.