Ahead of Super Bowl LII, Demand for Bobblehead of Eagles QB Drives Price Up 900 Percent

While many fans of the Philadelphia Eagles have been spending their hard-earned cash in physical locations ahead of the club’s Super Bowl LII appearance, others have chosen to hit the internet in earnest to secure merchandise pertaining to the Birds. The latter set has no doubt wanted to make purchases to show its love for Nick Foles, the backup quarterback who has guided the squad to two playoff victories and who, if he can help his team down the favored New England Patriots on Sunday, will claim immortal status, as such a win would bring the Lombardi Trophy to Philly for the first time, and that reverence for the 29-year-old has spiked a 2014-released bobblehead’s cost, driving it up 900 percent.

Foles, who had played second fiddle to starter Carson Wentz before the franchise signal caller’s Dec. 10 knee injury, has turned worriers into believers, as he has used the powerful right arm that led to a 2013 Pro Bowl selection—spurred by a seven-touchdown masterpiece against the Oakland Raiders—to orchestrate triumphs over the Atlanta Falcons and Minnesota Vikings. The Patriots, however, present far more challenges, so the underdogs will need the 6-foot-6 gunslinger to be a giant contributor to their upset plans at Minnesota’s U.S. Bank Stadium. Confident that he will, fans have been decking themselves in his No. 9 jersey and have been coveting a bobblehead that commemorates the aforementioned game against the Raiders, with the price on Fan Stop Pro soaring from $29.99 to $299.98. 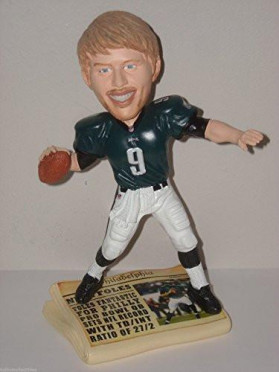 Nick Foles is thoroughly enjoying his second stint as a Philadelphia Eagle and has the club one win away from its first Super Bowl title. | Credit: Fan Shop Pro

Foles, a 2012 draft pick by the franchise that last tasted a title in 1960, returned to the Eagles this season after a couple of lackluster campaigns with the then-St. Louis Rams and the Kansas City Chiefs, and has defied F. Scott Fitzgerald’s “There are no second acts in American lives” stance by completing 77.8 percent of his postseason passes, tossing three touchdowns against zero interceptions and registering a 122.1 quarterback rating. The bobblehead, therefore, has become a compelling complement to his jersey, and the fact that Foles—following his March 10, 2015 trade to the Rams—became a bit of a forgotten figure has made the product a lesson in supply and demand.

Fan Shop Pro dubs it a “very limited edition” offering, and those wishing to have it be a part of the proceedings as they watch the Super Bowl will be parting with some serious scratch. Those same parties would certainly not mind if Foles were to throw for seven scores again to produce a blowout win, but even if the Eagles were to emerge with a one-point victory, the man who has often heard that he resembles Napoleon Dynamite can mimic the cinematic character by overcoming great odds and defeating a more esteemed foe.

Foles and the rest of the flock have enjoyed adulation not only from their fan base at large, but also from another franchise that plies its trade in South Philly. The 76ers, long accustomed to having people critique their capacity to compete, have surprised many observers by registering a 24-24 mark, good for eighth place in the NBA's Eastern Conference. Tomorrow’s home tilt at the Wells Fargo Center will find the squad holding Brotherly Love Night, with the first 10,000 fans to receive shirts depicting the logos of the basketball bunch and the gridiron greats. Here in Philadelphia, the excitement to see the Eagles come through is beyond palpable, and having the 76ers stoke the enthusiasm is a nice gesture on their part, as well as a great way to promote brand identity.