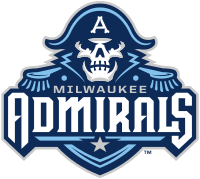 The Milwaukee Admirals serve as the minor league affiliate for the NHL's Nashville Predators. | Credit: Wikipedia

His birth certificate acknowledges Boston as his home city, but we here in Philadelphia long ago claimed Benjamin Franklin as one of our own, with Eagles fans especially aware of that after having saluted their heroes along his eponymous parkway Feb. 8. We certainly have no problem sharing regard for one of our nation’s Founding Fathers, whose name has inspired counties, municipalities and schools, among other entities, to christen themselves after the bigwig, but there might be a few among us who scratch our heads over what the Milwaukee Admirals are planning. Tomorrow, the American Hockey League team will distribute bobbleheads in Franklin’s likeness, making the jack of many trades the latest curious choice to compel such a promotion.

However, if we inspect the list of places that owe their names to Franklin, we might not wonder why a club in Wisconsin, which did not enter the union until 1848—58 years after his death—is choosing to issue the collectible. Five towns and one city within the Badger State are dubbed “Franklin” in honor of the colonial version of the Energizer Bunny, and, apparently, that is enough reason for the Nashville Predators’ minor league affiliate to venture back to the 18th century for Saturday’s 1 p.m. Panther Arena matchup against the Texas Stars.

“This founding father, inventor, scientist, printer, politician and diplomat invested a significant portion of his life investigating electrical phenomena,” the organization, celebrating 20 years as the pipeline for players to join the Predators, said, playfully adding “It’s no wonder he was drawn to the electrifying nature of the Admirals.”

I don't entirely understand why the @mkeadmirals are doing a Ben Franklin bobblehead but I love it! He becomes the 33rd bobblehead on my desk. (I had to take talking Hank from the @Brewers home because someone would steal him) pic.twitter.com/GCb3aYyxzO

While that description might register as a stretch to many consumers and lead them to tell the Admirals to “Go fly a kite,” others will see it as an extension of what the unit considers a “pretty good tradition of unique bobbleheads.” Those annals include nods to presidents Abraham Lincoln, Barack Obama, Theodore Roosevelt, Donald Trump and George Washington, as well as nominees Hillary Clinton and Mitt Romney.

The decision to commend Franklin, whose bobblehead finds him sporting Admirals apparel and holding a key attached to a kite, is the franchise’s second such move since the fall to acknowledge a historical mover and shaker. On Oct. 21, it issued a Martin Luther bobblehead to commemorate the approach of the 500th anniversary of the theologian’s initiation of the Protestant Reformation and to celebrate Milwaukee’s heavy Lutheran population. A month ahead of the distribution, Promo Marketing called the Luther promotion an example of “great marketing.” With regards to Franklin, whose likeness will go to the first 3,000 fans thanks to Waukesha, Wisconsin’s Professional Construction Inc., we are going to consider it a solid way to keep history alive and hope that interest in the kite-holding icon soars thanks to the promotion.