Alaska Airlines' New Uniforms Are Here and They're Classy as Heck

Alaska Airlines employees were able to preview the new uniforms at a runway event. | Credit: POPSUGAR

Last week, we revealed the news that Alaska Airlines was getting ready to unveil its uniform redesigns. This was exciting news, given the airline last overhauled its uniforms in 2011 (however, the last major redesign was 25 years ago). And with the merger between Alaska Airlines and Virgin America, these new uniforms had to be representative of the identifying qualities of both airlines, while still looking sharp.

Now we can see the uniforms for ourselves, and it looks like Alaska Airlines delivered on the hype. The new collection, designed by Seattle-based designer Luly Yang, features over 90 garments and accessories, and these classy looks owned the runway at the uniform reveal last Thursday night.

"It was a melding of the two to create this West Coast-modern vibe that's fresh and pops of color; nice energy that's classic yet modern," Sangita Woerner, Alaska Airlines' vice president of marketing, told POPSUGAR. "[Our uniforms] definitely needed to be more modernized, a little bit fresher and better fitting, which I think Luly's done a fantastic job of doing." 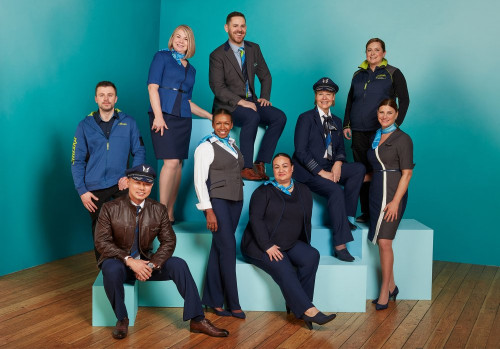 The new uniforms feature navy, waterproof trench coats for all employees, and brown leather pilot jackets. But, according to POPSUGAR, it was the pockets that got the crowds excited. Every apparel piece, including dresses, featured pockets to fit larger devices.

Other features included shirts that stay tucked in and comfortable waistband stretch.

So far, the response to these new uniforms seems positive. The uniforms will be wear-tested for the next 60 days, so hopefully no issues arise.

Decoration Diaries: How One Distributor Handled a Complex Uniform Revamp With a Company Store and Fulfillment Program
Comments
The Top Lists