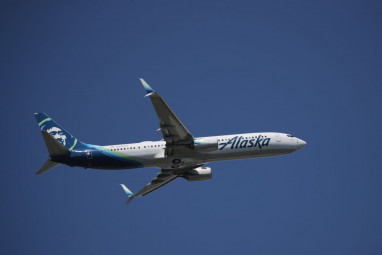 Having a reusable water bottle is the future, whether you're ready for it or not. Thanks to college campuses and national parks, it's becoming increasingly difficult to get your hands on single-use plastic bottles in public settings. Environmentally speaking, that's great news. It's also good news for promotional products distributors selling drinkware.

You can add airlines to the list of companies getting in on the reusable bottle craze, after Alaska Airlines launched its #FillBeforeYouFly campaign to reduce waste and encourage customers to bring refillable water bottles on the plane.

"We're passionate about working with our guests, employees, airports and partners to reduce waste, protect habitats and improve water health," Alaska Airlines vice president of external relations Diana Birkett Rakow said in a statement, according to MSN. "Land, water and animals are incredibly special parts of the places we live and fly. If just 10 percent of us flying Alaska bring our own pre-filled water bottles when we fly, it would save over 700,000 plastic water bottles and 4 million plastic cups per year. That’s a big lift.”

The effort to minimize single-use bottles has seen results worldwide, with one of the most high-profile and wide-ranging efforts being the European Union's decision to ban or significantly reduce single-use plastics.

Alaska Airlines also isn't the first name in air travel to work toward minimizing single-use plastic bottles. San Francisco International Airport announced in August that it would no longer sell single-use bottles, instead encouraging travelers to fill reusable bottles at refill stations around the airport.

Bring your own refillable bottle -- #SFO has 100+ hydration stations 💧 throughout the airport to help you fill up & stay hydrated. https://t.co/T6L5dA858Q

“We’re the first airport that we’re aware of to implement this change,” SFO spokesman Doug Yakel said, according to Today. “We’re on the leading edge for the industry, and we want to push the boundaries of sustainability initiatives.”

The airport's decision follows the city's 2014 rule against single-use bottles in city-owned properties.

This is a trend that's gaining serious momentum. And it's worth reminding clients of that when they're considering sustainable products for their next promotion.

Coloreel's New Embroidery Thread Is Made From 100% Recycled Plastic Bottles