We all saw the catastrophe that was Kendall and Kylie Jenner's attempt to use celebrities' likenesses, like Notorious B.I.G. and Jim Morrison's, on a new line of T-shirts (without permission). It didn't end well—in fact, it ended in a lawsuit. Well, it looks like someone who has been in the fashion industry a lot longer, Alexander Wang, is attempting to do the same, but he's following the rules.

According to Billboard, the fashion designer is teaming up with popular vintage brand Procell to create a line of 40 rare merchandise T-shirts. The collection will feature Wang's "dream lineup," including Aaliyah, Dr. Dre, Lauryn Hill, the Wu-Tang Clan and more. 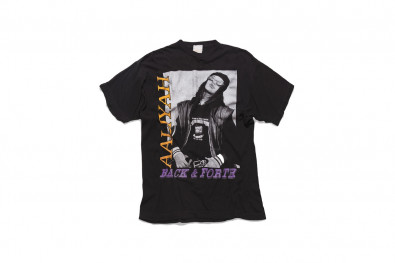 “I’ve always believed that 'luxury' is defined in many ways; to some, a rare T-shirt with sentimental value may be the most luxurious item in their closet," the designer told Hypebeast. "These shirts are not only articles of clothing, they really are artifacts from a moment in time. I love how they tell a story from such a specific event and simultaneously blend a feeling of discovery and nostalgia."

The collection ranges in price from $300 to $2,000, making these tees far from your typical concert merchandise, and they are set to launch today in NYC.

Thankfully, it looks like Wang is not pasting his own image over the images of these icons, and it's safe to assume Procell, as a reputable vintage brand, has all the proper licenses in place.