Why Some Major U.S. Sports Stadiums Are Switching to All-Aluminum Drinkware

Stadiums and arenas are back open for games and concerts, but things in the stands might not feel totally the same ever again.

At least, if you’re in some particular arenas and stadiums, you might notice that your drink is in an aluminum cup, rather than plastic. That’s part of an initiative from Ball Corp., the manufacturer best known for its Mason jars.

Environmental issues around single-use plastics are a hot issue inside and outside the promotional products market. And while some might assume that all plastics and recyclables are created (and recycled) equally, that’s not the case. Aluminum is actually infinitely recyclable, meaning the material doesn’t diminish each time it's repurposed.

Now, aluminum does require more resources to extract and refine, but using recycled aluminum reduces energy usage by 95%, according to Fortune.

That fact is what’s at the heart of Ball Corp.’s mission to replace plastic cups with aluminum, at least as far as its own stadium contracts go.

“If you compare plastic against aluminum and only look at the divergent composition, without taking into account the infinite recyclability of aluminum, the carbon footprint of plastic is better,” Ball Corp. president Dan Fisher, told Fortune. “If a circular system is sufficiently in place, using recycled aluminum reduces greenhouse gas emissions and the carbon footprint during production. However, when virgin material is used, it is crucial to lower energy through wind and solar power and other renewable sources to counteract the impact.”

Ball Corp. partnered with Kroenke Sports & Entertainment—which owns stadiums such as SoFi stadium in LA, Emirates Stadium in London and Ball Arena (formerly known as the Pepsi Center) in Denver—to replace all plastics with aluminum products, such as cans, bottles and cups. The venues also implemented more robust recycling programs, which Ball Corp. says will be part of a circular system by 2022.

Ball also partnered in 2019 with Hard Rock Stadium in Miami to create aluminum cups, which the NFL also used for the Super Bowl. 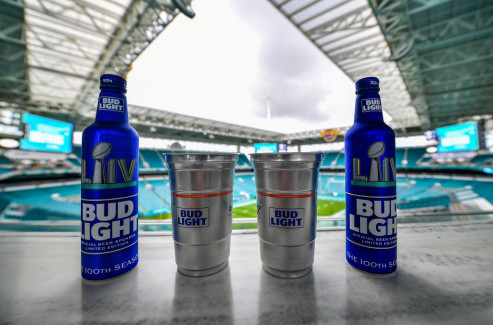 A general view of the new aluminum cups by Ball and Super Bowl Bud Light bottle on display at Hard Rock Stadium, which has become the first sports facility to completely remove all plastic products. Prior to the game between the Miami Dolphins and the Cincinnati Bengals. on December 22, 2019 in Miami, Florida. | Credit: Getty Images by Mark Brown

As other venues start seeing the results of these initiatives, they might just switch, too. Here are some eye-catching statistics from Fortune:

If 80,000 attendees are at a professional sports game, approximately 160,000 cups or bottles are used. Unless sporting events eliminate concessions altogether (and what fun is that?), it’s almost impossible to avoid it. Thus many venues are leaning into thoughtful procurement of packaged goods and better trash management. The aluminum cup has become an easy way to divert waste from landfills and engage the consumer.

It’s a relatively easy switch. Most consumers won’t notice a difference between plastic and aluminum. It at least wouldn’t be enough to really change their experience, like some people have with plastic straws giving way to paper straws. Cyclical, environmentally-friendly initiatives like this are becoming more mainstream, with major brands like Burger King and Starbucks trying them out.

Ball Corp. and KSE are also doing a lottery system, encouraging fans to participate in recycling programs with the chance to win meet-and-greet with players, backstage passes at concerts or free tickets to events—all just by collecting their trash and throwing it in the correct recycling bin. (That creates a need for signage at the arena, too.)

It’s far from universal, but as opposition to single-use-plastics grows, and people become more familiar with the difference that aluminum provides, it might just become the standard drinkware for arenas in the U.S.