Always Proofread: Here Is Each State's Most Misspelled Word

When I attended grade school back in the Paleozoic Era, my classmates and I loved our weekly spelling contests where, no matter who our facilitator was, we looked not only to master our assigned words but also to tackle some wild card selections. Millions of years later, I still geek out on these letter placement challenges and am thankful that Google Trends yesterday released a map of the most misspelled word in each state, with some of the troublemakers striking me as “beautiful” reminders of how even common utterances can catch us by “surprise.” 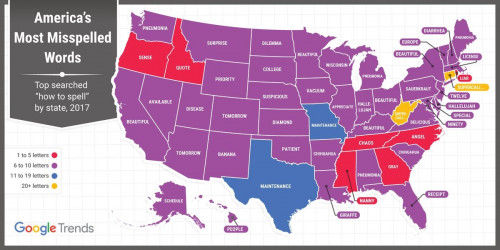 Google Trends is aiming to help Americans to overcome their spelling predicaments state by state. Click to enlarge. (Image via Twitter)

Those above offenders, which plague the residents of California, Minnesota, Montana, New York and Ohio, appear along such head-scratchers as “angel,” North Carolina’s chief stumper; “twelve,” New Jersey’s top baffler; and “nanny,” Louisiana’s most notable nuisance, on the list that the public web facility issued ahead of the 90th Scripps National Spelling Bee. The treasured competition commenced this morning and will conclude tomorrow, with the participants, including wunderkind Edith Fuller, destined to deal with words far more perplexing than “tomorrow,” the tormentor of Arizona and Colorado inhabitants, and “liar,” Rhode Island residents’ cardinal conundrum.

Google Trends gathered the information through an analysis of “how to spell” inquiries, and one can only imagine how many times searchers said “I’m waaaaay off” when learning the proper order of the mysterious letters. While some gaffes are somewhat understandable, such as “Hallelujah,” which Indiana denizens can now correctly spell when thanking their maker, and “suspicious” (though one wonders what sorts of deeds are occurring in Nebraska), the ultimate oddity has to be that Wisconsin dwellers have often misspelled their home state.

“It becomes a great commentary on the education trends of our society,” Madison Public Library administrative clerk Tom Karls said of the Badger State’s result, adding that said society has come to call on Google far more than traditional reference sources.

With so many choices when trying to convey ideas, everyone at some time or another will become puzzled. Typos are an extension of the often humorous and frequently frustrating task of conveying information correctly, especially within the promotional products industry. Therefore, we recommend that distributors engage in diligent proofreading when conceiving and issuing items. If you follow our advice, we might even treat you to some “sauerkraut,” which we will definitely spell correctly if asked to do so.

Related story: Today in Typos: 'In Dog We Trust' Printed on Sheriff's Rugs