How to Always Strive for Your Best Promotion 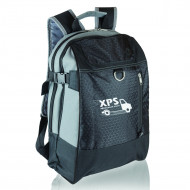 Sometimes the best promotional item is one tailor-made for the client, like this Flare Transit Backpack from BEL Promo that could be used for a school trip.

Sometimes it’s difficult to select a promotion that’s one of your best. For some distributors, it’s kind of like (to use an old cliché) trying to choose your favorite child. So, with this edition of My Best Promotion, we’re not focusing on one promotion a distributor is proud of. Instead, we spoke with Theresa Gonzalez, president of Stay Visible, New Fairfield, Conn., about what makes a promotional campaign stand out. For her, the best promotions are those that feel like collaborative projects between the supplier, the distributor and the end-buyer.

Promo Marketing: So, have you thought about a promotion that you saw as one of your best?

Theresa Gonzalez: As I said, it was very hard to kind of even think about it. Unfortunately, I did not think of one specific one. It was really more a matter of, you know, what I consider to be a successful promotion.

It’s kind of like a combination of multiple things, where there’s reward in the sense that you knew you did a great job for your client, and that they’re meeting their objectives and goals, and you helped them accomplish that. It’s really a partnership with our clients that kind of makes all that happen. So, there really isn’t one specific promotion that I can say. It’s just always a constant wheel in motion for me.

PM: What gives you the biggest feeling of accomplishment after a promotion you felt was very collaborative?

TG: The one thing that I truly love is when I get to be creative. We can certainly pull stock items off a shelf and brand them with a logo, but that’s not creativity. I love it when we can incorporate print and packaging along with products. I love when we can mesh all those worlds together, because then it becomes a marketing campaign. It’s changed over from just a branded item that you’re trying to use as a strict advertising vehicle to more of a marketing piece that sends a message. It’s the marketing vehicle that carries a marketing message.

PM: Are there any common mistakes new distributors might make that you’ve learned to avoid over the years?

TG: Oh, yeah. There are rookie mistakes. It’s really a matter of distributors thinking, “Oh, well I saw it for 3 cents cheaper from this supplier that really isn’t a preferred, vetted supplier.” Just because they can do it 3 cents cheaper doesn’t mean they’re going to do a better job. So, if there’s advice that I can give to rookies when dealing with suppliers, it’s really more of a matter of having conversations first, and getting to know the supplier, how they work, and asking them up front: When and if there’s a problem, how do you handle it? Because that’s as important as knowing whether or not they have good decoration qualities, available stock, all of those other things that are important from the client perspective, but from our perspective it’s really how they deal with problem solution as well.

Start 2021 Right at Our Back to Business Virtual Power Meeting: Winter Edition

Proforma Gives Back to Local Community With Holiday Fundraising

2020 Wrap-Up: The 10 Weirdest Promo Stories From This Year

2020 Wrap-Up: All Our PM Longform Stories From This Year
Comments
Happening Today
The 3 Product Categories Seeing the Most Demand