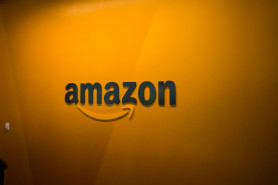 Almost exactly one year ago, Amazon expanded its Merch by Amazon print-on-demand service with new items, like PopSockets, to go with the standard assortment of apparel offerings already available. Now, the company is quietly expanding its on-demand printing capabilities at facilities in Pennsylvania and elsewhere, and has been adding to its growing list of big-name client partners.

As Reuters puts it, these companies and brands are "up-ending the traditional licensing model, where brands worked with apparel wholesalers to produce garments and get them into stores." You might say that, yes, Amazon is "disrupting" the apparel and custom merchandise printing model.

"You can list overnight on Amazon all the merchandise that's for sale, and then as you book sales you just make it and ship it," intellectual property lawyer Gaston Kroub told Reuters. "It completely cuts out that whole traditional supply chain."

"The profit-sharing on-demand model existed before Amazon started their effort, but the size that they are, they have created a tidal wave," Gabi Seligsohn, former CEO and current board member of Kornit Digital Ltd., the company that provides the textile printers used by Merch by Amazon, told Reuters.

Traditional supply chain disruption is old news in the promotional products industry. But what's setting Amazon apart from the competition, both print-on-demand and traditional, is the innovation behind its print services, as well as the sheer scale and reach of the mega-company. Amazon has been filing patents at a scale comparable to the biggest tech companies in the world—on par with Apple, Sony and Toyota, and even more than Ford, Dell and Toshiba. In 2017, Amazon acquired 1,960 patents.

"There is no doubt that patenting activity is indicative of some kind of market trend," John Lanza, an intellectual property lawyer, told Reuters. "On-demand apparel manufacture is very hot."

So, it's not a surprise that brands like Disney and Dr. Seuss are seeing Amazon as the answer to many of their branded merchandise needs. Reuters reported that the Dr. Seuss brand increased sales through the Merch by Amazon platform by 40 percent since it opened its e-commerce site on the platform a year and a half ago.

Disney, which started selling through Merch by Amazon in 2016, reported that it has expanded its product line for all of its franchises on the platform over time, including huge names like Star Wars, Pixar and Marvel. Using Merch by Amazon has allowed Cartoon Network to increase profits, the company told Reuters. Many of these brands still source some amount of their custom merchandise through traditional channels, but Amazon's on-demand print service has allowed them to frequently update and change products and offer items that might not have enough demand to produce en masse for physical retail outlets.

As the service continues attracting big-name clients, Amazon looks to be gearing up to increase printing capacity. Via Reuters:

Amazon also runs a second printing facility in Dallas, which was also recently granted preliminary permission to install more printers, a spokeswoman for the Texas Commission on Environmental Quality said.

The company also launched a Merch by Amazon facility in Poland last year to service British and German markets.

This absolutely doesn't spell doom for traditional distributors. As PromoCorner president Bill Petrie said during the PPAI Expo this January, the best way to compete with Amazon and other major online competitors is to not even compete with them at all. This means saying no to small orders, looking for recurring revenue opportunities (think subscription services) and trying new things without the fear of failure.