Amazon will begin selling more officially licensed NFL merchandise, such as replica jerseys, tailgating products and more, thanks to a new agreement between the company and the league.

Effective yesterday, Amazon can now sell licensed NFL products from brands like Fanatics, New Era and more. Nike, however, will not be included.

As Sportico reported, it’s unclear whether this is a pilot project or a long-term agreement between. But, given Amazon’s continued exploration of the branded merchandise world through its own program and partnerships like this, it’s an interesting development for both the league and e-commerce in general.

Fanatics, which operates the NFL’s online store, created an NFL Shop “storefront” on the Amazon platform, which marks the first time Fanatics will sell its products on Amazon. 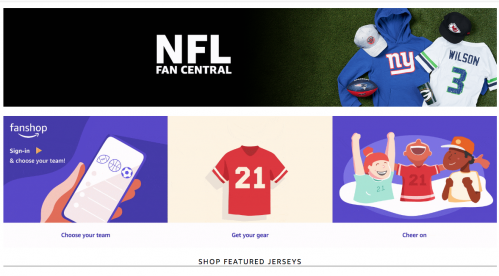 “Amazon continues to collaborate with the NFL to enhance our customer experience,” Amazon said in a statement to Sportico. “And we look forward to expanding our assortment of NFL products.”

As part of $105 billion in new media deals, the NFL agreed to expand its streaming capabilities to Amazon, giving the e-commerce platform exclusive rights to show Thursday Night Football games. These two deals are unrelated, but if the NFL is airing games on Amazon Prime, there’s always the possibility of advertising its e-commerce platform for fans to buy team gear rather than on the NFL site.

As Sportico pointed out, this doesn’t give Amazon’s proprietary branded merchandise initiative any more of a foothold in the industry. That’s because the products are still being sold on Amazon via Fanatics. Fanatics itself has licensing agreements with the NFL and 25 of the league’s teams.

Also, as stated above, Nike will not be included in this, given the fact that Nike pulled its products from Amazon two years ago, meaning fans will have to buy authentic jerseys and sideline apparel elsewhere.