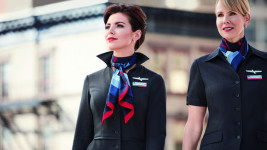 Who doesn't love a new uniform? The clean smell, the wrinkle-free fabric and, of course, the subsequent hives and rashes.

Yes, you read that right. If you happened to be an American Airlines employee, your new uniforms came with an unfortunate surprise—at least for 1,600 employees. Initially, the symptoms seemed contained to about 600 employees. But, according to USA Today, the numbers have increased to more than 1,600 workers.

In terms of the specifics, numerous claims of itching, rashes, headaches, eye irritation, hives and even respiratory problems are the chief complaints.

As a result, the Association of Professional Flight Attendants (APFA) is demanding a total recall of the uniforms.

“The growing number of reports of suspected reactions, triggered by both direct and indirect contact with the uniform, has prompted APFA to ask that all uniforms be recalled until further joint testing with the company can be completed,” the union said in a statement, according to USA Today.

American Airlines will participate in a fourth round of testing, but at this point, the union is asking for a full recall of the uniforms.

The new uniforms are made of wool, so it's unclear what is causing the problem. For those suppliers and distributors working in the uniforms sector, it may be best to suggest alternatives to wool for the time being. At the very least, it seems the wool could potentially trigger an allergic reaction.

Our 5 Favorite Promotional Products of the Week: Scrubs With Dark Humor, Bobblehead Pins and More
Comments
The Top Lists