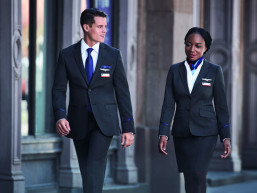 The Star-Telegram reported that more than 100 American Airlines pilots have reported allergic reactions to the new uniforms.

"We've had pilots that are beginning to report the same reactions as our flight attendants," Dennis Tajer, a spokesman for the Allied Pilots Association, told the Star-Telegram. "We had about 100 reports, but we're getting indications that there are more out there."

Previously, we reported that flight attendants were experiencing hives, headaches, breathing problems and rashes from the new uniforms. In an attempt to sweep the whole thing under the rug, American Airlines executives offered to wear the uniforms to prove the employees wrong.

Well, now that the pilots are complaining, this just stepped up a bit. After all, it's safe to say that a pilot experiencing health issues mid-flight is bad. (That's kind of how the movie "Airplane!" started.)

Some pilots have taken medical leave due to reactions related to the uniforms, Tajer said. The union, which represents 15,000 pilots, has decided to conduct a survey of its members and provide a process where pilots can report uniform problems. At this point, the union does not know how widespread the issue is, he added.

"We've been in touch with the APA for the final process of adding a fourth option for pilots," American Airlines spokesman Ron DeFeo told the Star-Telegram, adding that the airline received only four injury-on-duty claims from pilots related to the uniforms.

The manufacturer, Twin Hill, stood firm in its claim that the uniforms are safe, and that scientific testing has shown chemicals in the clothing are below established industry levels. However, as we reported previously, the Association of Professional Flight Attendants has been pushing for a fourth round of testing.

It's also worth noting that Alaska Airlines received uniforms from the same manufacturer in 2012, and got similar complaints over health problems.