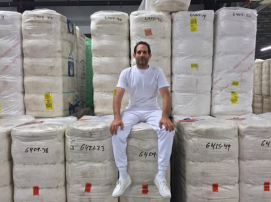 Dov Charney, founder and former CEO of American Apparel, is getting his new apparel company off the ground in South Central Los Angeles. (Image via Instagram)

Dov Charney, disgraced founder and former CEO of Los Angeles-based American Apparel, is back in the apparel game and ready to compete with his former company. After announcing in April that his new company would be up and running soon, Charney's unnamed business reportedly is selling to a select handful of wholesale clients.

Business Insider said Charney launched a new website called "That's Los Angeles, by Dov Charney," which features images of the run-down and aging cityscape of downtown and South Central Los Angeles. This follows suit with what we reported about Charney showing interest in some of the grittier neighborhoods of the city.

Charney neglected to tell Business Insider the official name of his new company, but said that he has a secret factory with about 40 workers. Based on his Instagram account, he's working out of a facility in South Central Los Angeles—an area he claimed he would "make cool," like he said he did for downtown Los Angeles when he rooted American Apparel there—and is continuing with the do-it-yourself ethos on which he founded American Apparel.

His determination to stay in Los Angeles comes shortly after his former company indicated that it is exploring outsourcing opportunities to other areas of the U.S., such as the South.

Charney added that he's starting with T-shirts, just like he did when he founded American Apparel.

"We've developed some new shapes and new bodies," he told Business Insider. "T-shirts are very specific. Two T-shirts look the same from afar, but up close it's two different movies. There is something different about them even when they are the same brand, same size, same color."

His main focus for this new venture is finding a T-shirt design for the future, like he did with fitted T-shirts in the '90s at American Apparel. His Instagram account also shows images of him cutting denim and working with a knitter on golf shirts, among even more images of vintage L.A. storefronts and urban decay. One post stated that the cotton he's using for apparel is grown in Georgia and spun in South Carolina.

As of now, Charney only is working with wholesale customers that he knows on a personal level. Because of this, it's unclear exactly how long he has been doing business or when he will open the door for more companies to work with the new brand. He told Business Insider that he thinks the company can reach $30 million in revenue within a year.

Business Insider also reported that Charney received a bit of investor funding, possibly from Hagan Capital Group, which supported his attempted takeover of American Apparel in January. Due to his infamous background at American Apparel—creating hypersexualized ad campaigns and allegedly harassing employees—some investors have been hesitant to work with him.

When asked if Charney would change his personal behavior after what happened at American Apparel, Charney said that he didn't believe his behavior was bad and much of it was embellished.

"There's a myth and there's a reality," he told Business Insider. "There's also the reality of a man's age, you know? I'm 47. I don't think I could keep up with the myth even if I wanted to."

Disregarding his personal report card, American Apparel owes a lot of its success to Charney's vision for apparel design and production. There's no denying that. He saw the future of tighter, fitted shirts in an era of baggy designs and boxiness, and was a champion of locally produced products from the get-go. So, it's a pretty safe bet that Charney will look to create what he believes will be the next big thing in apparel at his new company. And with American Apparel showing cracks in its foundation, his timing might be right.