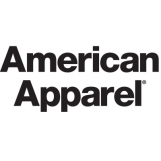 Grayson, a lawyer with a background in mergers and acquisitions, has served as general counsel for American Apparel for two years. Schneider departed the company on Monday, so Grayson already has assumed her new position.

Many in the industry have speculated that these recent shifts in the company signal a sale. Rumors have been swirling for some time that American Apparel is hunting for a buyer as part of its post-bankruptcy plans. Some analysts argue that hiring a lawyer, especially one with a background in mergers and acquisitions, as the new CEO could indicate a sale is imminent.

While there have been rumors circulating about who would (hypothetically) buy American Apparel, one thing is certain: It won't be Dov Charney, according to the Business of Fashion.

"The business is dead now," he told the Business of Fashion. "It's gone. It will never come back. It is not going to resurrect. It's not going to have a happy ending. They destroyed it."

Instead, Charney is working on a new company.

American Apparel has not commented on the sale rumors, but we will update you if that changes.