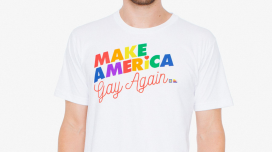 American Apparel teamed up with the Human Rights Campaign and The Ally Coalition for the 'Make America Gay Again' line. (Image via Twitter)

According to a press release, the three companies teamed up to raise awareness for LGBTQ issues after numerous states introduced legislation that many see as harmful to the LGBTQ community. Thirty percent of sales from the campaign will go toward the Equality Act of 2015, which is a bill intended to amend the Civil Rights act of 1964 to protect individuals against discrimination based on sexual orientation, gender identity and sex related to employment, housing, education, justice and more.

Jack Antonoff, musician in the band Fun and founder of TAC with his sister, Rachel, said in the press release that the idea is to unite people against legislation that jeopardizes job opportunities and health for members of the LGBTQ community.

"Rachel and I founded The Ally Coalition to inspire fans to take action for LGBTQ equality," Antonoff said in the release. "During a year when LGBTQ rights are being threatened over the states, everyone is responsible for coming together and challenging these injustices. I'm proud that The Ally Coalition is joining with American Apparel and The Human Rights Campaign to #MakeAmericaGayAgain."

"Today, LGBTQ people remain at risk of being fired, evicted or denied services in a majority of states simply because of who they are," Olivia Alair Dalton, senior vice president of communications and marketing for HRC, said in the release. "We are excited about our partnership with The Ally Coalition and American Apparel, which empowers people to subvert the politics of hate and division by creatively speaking out for the equal rights and dignity of LGBTQ people."

The campaign also will include stories and videos on social media and on American Apparel's website to educate people on acceptance. The company also will hold events in Hollywood and New York City throughout the month of June.