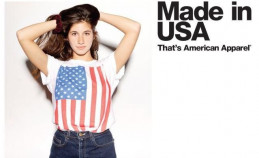 Los Angeles-based American Apparel has launched a crowdsourcing campaign for its made-in-the-U.S. products, according to a press release.

Recently, the company announced it might begin outsourcing a portion of its manufacturing to another U.S. clothing maker. Now, American Apparel is asking vendors for proposals pertaining to U.S.-made goods retailing for $100 or less. Product segments include footwear, jewelry and leather products.

"Cutting and sewing 100 percent of our garments in America is at the core of our DNA," Cynthia Erland, senior vice president of marketing for American Apparel, said in the press release. "We want to continue to support manufacturing in the U.S. by giving small businesses the opportunity to thrive and succeed. We are very excited to launch our 'Made In' crowdsourcing campaign by soliciting ideas for third-party accessories and small home goods made in America and giving these vendors the opportunity for distribution in our stores and online globally."

Submissions must be in the form of a 90-second video, American Apparel said in a statement Wednesday. The proposals are due June 17. Vendors seeking to apply must be able to deliver 500 items to American Apparel's distribution center within 30 days.

According to the Los Angeles Times, several vendors have submitted ideas for consideration, including Newark, New Jersey-based Unionwear, a manufacturer of hats, bags and other accessories. Mitch Cahn, president of Unionwear, said American Apparel would be a good fit for his firm.

"We have a number of customers that have two to 500 stores," he said. "It makes sense for a company of that size to buy domestically. That's where our bread and butter is."

What do you think of American Apparel's crowdsourcing plan?