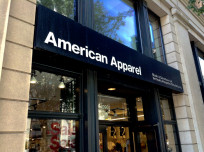 After spending years mired in controversy, it seems that American Apparel is well on its way to staging a comeback, sans toxic founder and CEO Dov Charney, whose predatory behavior nearly sunk the brand for good.

Having undergone a drawn-out bankruptcy process, American Apparel was bought by Gildan Activewear in 2017 for $88 million. While the brand was initially integrated into Gildan’s low-cost manufacturing chain, American Apparel’s U.S. website was relaunched in August and online sales were expanded to 200 countries last month, showing that Gildan had higher expectations for its acquisition.

Now it seems the next step in that relaunch process has arrived, as Gildan has announced that it will be opening the first new brick-and-mortar American Apparel store since the last of them were closed last year. According to Glenn Chamandy, CEO for Gildan, the new store will open in the fourth quarter of 2018 at an old American Apparel location in Los Angeles and will act as a test for possible future expansions.

"We're opening one, and that's going to be like a test model store for us, and then we're going to see where that takes us in the future," he said. "We either could franchise, we could open a couple more, we haven't decided yet."

For a company that once ran 280 stores and five factories while selling more than $600 million worth of apparel, this could be a step in the right direction as it attempts to rise from the ashes of Charney and bankruptcy. For Gildan, this will be an opportunity for the brand to see if its investment will pay off.

According to the Los Angeles Times, Gildan’s shares rose as much as 5.7 percent on Thursday, which would make that its biggest growth in a year. If Gildan manages not only to relaunch American Apparel, but also to grow it to where it was at the height of its power, it can expect this number to rise significantly. We’re sure their fingers are crossed.