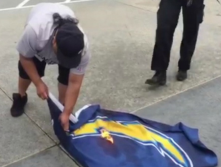 In response to the team's decision to relocate to Los Angeles, upset Chargers fans took their emotions out on the team's merchandise. (Image via ABC 10 News)

It's been a rough week for the (new) Los Angeles Chargers. Obviously, the team caused a major upset when it announced its plans to move the team to Los Angeles. Then, it unveiled its new logo, which was a massive miss for fans.

And now, according to ABC 10 News, angry Chargers fans are destroying the team's gear outside its own headquarters. (And you thought you had it bad when you simply slept through your alarm.)

On Thursday, a group of Chargers fans gathered at the team's Kearny Mesa headquarters to destroy their Chargers gear. "How about we leave a large pile of Chargers merchandise at Chargers Park tomorrow," a Facebook post said, according to ABC 10 News. "If you plan to move to L.A., you can have all this gear back. I will no longer support the team."

As a result, dozens of fans showed up on the team's grounds to toss their team merchandise. One fan even was caught on camera lighting a team flag on fire.

Another fan went a different direction and decided to capitalize on the team's move with an entrepreneurial decision. She showed up to Chargers Park in a T-shirt with the new team logo and an interpretation that reads, "LAme". The T-shirts are available online for $29.99. 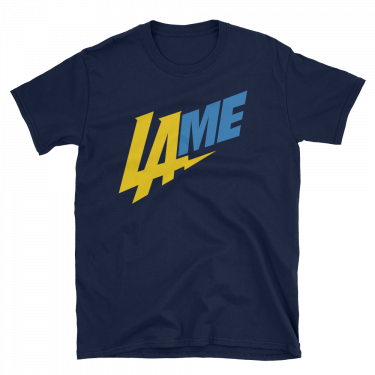 Those of you involved in the athletic and sportswear market know how heated fans can get. And, this just shows the power of branded merchandise.