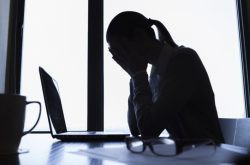 We know it can be difficult to get the press to cover new apparel products, but this apparel company went way too far to get its clothing some coverage. According to UPROXX, a PR rep harassed a journalist for months, even threatening to publish fake nudes of her if she refused to write about its products.

The writer, Taylor Lorenz, a journalist for The Hill, detailed the encounter, in which the company rep for an unnamed company relentlessly hounded her to cover cosplay and Halloween costumes, which weren't even her beat. The PR rep told Lorenz that if she wanted the harassment to stop, she needed to post a positive review about the apparel products. She also said that the company rep harassed other journalists, too.

Lorenz took to Twitter to draw attention to the issue, and Esquire writer Luke O'Neil decided to help her case and reach out to the company. The company eventually responded, saying the employee responsible had been fired.

UPROXX pointed out that if the company is outside the U.S., it will be difficult to report sexual harassment of extortion charges against it.

This story just goes to show you how important your chosen PR representatives can be for your brand. While any PR company can say they responsibly contact the press, it's up to you to ensure they're staying within the lines of ethics. If not, it's your brand that will suffer the consequences of bad press.