Thanks to 1969 and 2003 releases by directors Peter Collinson and F. Gary Gray, movie buffs can enjoy the high-stakes antics present in “The Italian Job.” Through the European Union Intellectual Property Office, fashion aficionados can have a variation on that title, The Italian Jobs, if you will, as it deemed brothers Vincenzo and Giacomo Barbato victorious in their quest to use the name of Apple Inc. co-founder Steve Jobs as the inspiration for their clothing and accessories company.

The siblings, who began their classification crusade in 2012, initially heard fortunate news two years later, with the aforementioned entity, then dubbed the Office for Harmonization in the Internal Market, siding with their claim that Apple’s failure to trademark the name of the business titan gave them the right to christen their company with it. Now, in terms of originality, the entrepreneurs, whose recent acquisition of more global freedom has brought them to the public’s attention, could certainly earn a rebuke for wanting to use another man’s identifier as their concept’s title. But, more fittingly, one could say they deserve a nod for noticing Apple’s oversight. Jobs, after all, certainly had a few coins in the bank through numerous ventures, with chief executive officer duties for Pixar and founder/chairman/chief executive officer roles for NeXT as the main complements to his Apple legacy. He died of pancreatic cancer in 2011, with the Barbatos paying homage to his ingenuity the next year through their brainchild. 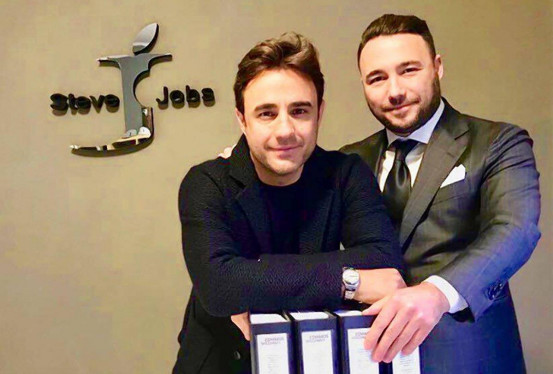 The Barbato brothers will now look to take a big bite out of the fashion world, and eventually the electronics market share, through their Steve Jobs brainchild. (Image via Facebook)

“We did our market research, and we noticed that Apple, one of the best known companies in the world, never thought about registering its founder’s brand, so we decided to do it,” the two told La Repubblica Napoli."  That admission really makes one think how Apple, at a time when people are adamant about trademarking and copyrighting everything, including engaging in disputes over letters of the alphabet, would have neglected to protect the name of Jobs, who, with Steve Wozniak, founded the force behind such products as the iPad, iPhone and iPod in 1976.

Instead of relentlessly rebutting the use of his name, the Cupertino, California company chose, per the aforementioned publication, to focus on the brothers’ intended logo, a stylized “J” with a missing chunk and a leaf very similar to the one in its famous symbol. That method made the bigwig vulnerable to the assertion that the letter, in not being an edible object like the ubiquitous fruit depiction, is not something that Jobs’ successors could deem a violation of their vaunted identifier.

The New York Daily News noted that the brothers feel their encounter with Apple stands as a contemporary version of the biblical battle between David and Goliath, meaning that a severe underdog, in terms of clout and reputation, again emerged a winner. Three years after triumphing, the Barbatos are looking to make their own fortune through apparel and accessories, but their overall brand goal consists of hawking electronics. Having those products anywhere near any of their items would surely end up pushing all of the wrong buttons from the current crop of Apple overseers’ perspectives, so this could be an interesting saga to observe. There is also a lesson to draw from this situation. At its core, Apple is a business behemoth, but even it forgot to ponder every aspect of how to sustain supremacy. In other words, in trying to outdistance everyone, it failed to think about, in one respect, one of the biggest agents behind its success. In yet other words, this case reminds all individuals and companies with an idea, regardless of how many concepts have come before it, to be diligent preservers of everything associated with it, namely, trademarks. Apple goofed and the Barbatos took a nibble out of its influence. Score one for the little guys.