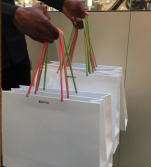 Apple previously used paper bags for the launch of its Apple Watch. (Image via 9to5 Mac)

As more cities and states are moving toward banning single-use plastic bags, tech giant Apple has decided to ditch them, too, instead choosing to give customers paper bags. 9to5 Mac published a message sent to all U.S. Apple employees detailing the move.

Previously, Apple has used paper bags for special occasions, such as the launch of the Apple Watch.

Apple has made it public that it is trying to be more environmentally conscious. According to Fortune, the company spent time during its "Let Us Loop You In" event on March 21 to discuss its sustainability efforts and announce that 99 percent of its product packaging is sourced from recycled paper or from a sustainably managed source. The company also said it's working to protect forests across the Eastern U.S., and even mentioned plans to recycle iPhone components into other products.

Apple sent a message to its staff regarding the paper bags. (Image via 9to5 Mac)