Are Shock Bands the Next Wearable Frontier? 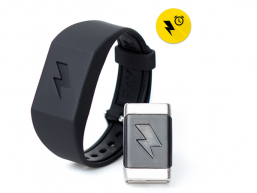 Shocking bracelets, like the Pavlok Shock Clock, could be popular wearable tech items. (Image via Indiegogo)

Lately, wearables have been in the news for everything from saving lives to uncovering lies. But wearable devices have only begun to scratch the surface of their capabilities. According to Engadget, a wearables company, Pavlok, thinks a device called the Shock Clock is the next hot wearable device for sleepy users.

Users wearing the Shock Clock can program their wearables to vibrate, beep or give an electric shock to wake them up. Designed for the snooze-abusers who take too much time getting out of bed, Pavlok claims it uses aversion therapy to change users' habits for good.

For those who naturally are not morning people, this wearable aims to shock users into better habits. Pavlok previously created other wearable products designed to shock users away from habits, such as nail-biting, smoking and sugar cravings.

Currently, the Shock Clock is crowdfunding on Indiegogo for $99.

The iPhone 14 Is Just Different Enough to Necessitate New Cases