Mariah Havard, a 10th grader at Buckeye High School in Buckeye, Ariz., found herself in the principal's office for wearing a "Black Lives Matter" T-shirt, according to 12 News.

School administrators told Havard the shirt wasn't allowed under the school's dress code policy, which bans clothing and accessories that can "disrupt the education process."

"I wasn't able to wear the shirt anymore because somebody made a complaint," said Havard, to 12 News. "I was a little bit confused as to why I wouldn't be able to wear something so meaningful to me." 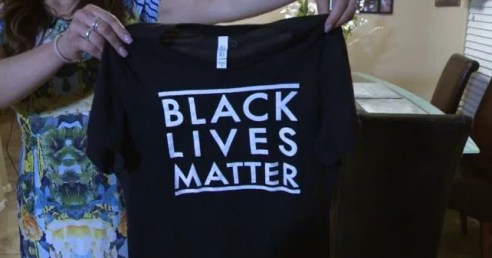 Students at Buckeye High School were ordered to change out of their "Black Lives Matter' T-shirts. (Image via nbc41.com)

According to Havard's family and friends, the school might be guilty of a double standard.

In an effort to support Havard, Santoyo wore a "Black Lives Matter" T-shirt to school. She also was asked to change. At this point, Santoyo pointed out the school's double standard in regards to the Confederate flag T-shirts. As a result, the school announced Confederate flag clothing would also be banned.

So far, Buckeye High School has not released any statements about the clothing bans.