Dating back to 1834, when members of the Cumberland Presbyterian Church founded it as Cane Hill School, the University of the Ozarks enjoys renown as the oldest higher education site in Arkansas. The Clarksville campus routinely receives regard as a U.S. News & World Report top tier destination, meaning that marketing its amenities finds employees eager to display their version of Southern hospitality.

Said workers know, however, that while their offerings will help students commence their career paths, there's intense competition from other colleges and universities to recruit those same students. To enhance accepted applicants’ estimation of their environs and to assist with the decision-making process as to where the young adults will forge their futures, Ozarks officials sent out gift box kits filled with promo items that this school year resulted in a 29 percent-higher commitment rate than what 2016-2017 yielded, with next year’s totals likely to be even greater.

“For many places, it can be enough to be cool with what they send,” Amy Lloyd, the school's assistant director of social media and digital marketing, said of what often goes into the process of sweetening the odds that a student will commit. “For us, though, we had been looking to tell a story, our story and that of our surroundings—that is, to facilitate the selection cycle for the learners.”

Connecting with the Winter Haven, Florida-based agency CNP, the university definitely nailed the “cool” component and successfully touted its rural roots via what its partner tabbed “an engaging acceptance package.” The gift box epitomized the school’s enthusiasm for “connecting with this generation of students where they are,” per Lloyd’s estimation, by including promo items like logo-bearing canteens, headband/scarf combinations or buffs, illustrated buttons that gave nods to notable outdoor spots and a comprehensive Scout Book that, at 32 pages, served as what CNP classified as a “half how-to guide, [and] half viewbook.” (The Scout Book would later win an American Advertising Award.) 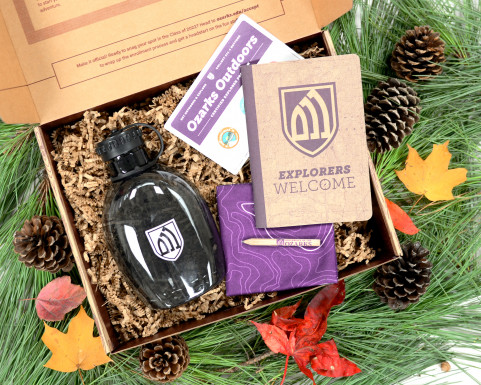 “The process of discussing what would go into the box was enriching,” Reggie Hill, assistant vice president for advancement and director of enrollment management, said of the brainchild born of conversation between the marketing department and admissions counselors. “We really wanted to give the accepted applicants practical products that would resonate with them, so we’re thrilled that so many saw the thought process behind our campaign and joined us.”

He added that along with their need to choose a major, Ozarks registrants must also select two minors, thus helping the school to stress its dedication to liberal arts instruction. That academic immersion, coupled with the promo items in the branded gift box, gave Hill and the Ozarks crew a very successful year, as the enrollment tallies surged this year and appear poised to go up to 31 percent come the arrival of the next class.

“We know that so many factors go into deciding on a college or university,” Hill added. “In this case, the boxes, which greeted potential attendees on their doorsteps, showed how eager we are to have them experience our culture and share that appreciation for our setting with us.”

Incredibly conscious of what Generation Z finds compelling, he and Lloyd anticipate having enthusiastic discussions on what will end up in next year’s gift box. For now, however, they are happy that the fruits of their labors have yielded such a ripe harvest.

“We talk about the push for the purpose,” Lloyd said of a guiding principle at the 755 student-strong haven. “That’s always going to involve engaging students to the fullest extent possible, and I’d say the box reflects our commitment to that.”