Under Armour's Sales Slump Just Got Much Worse 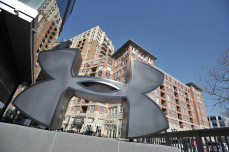 It looks like Under Armour is in more trouble than we thought. (Image via The Baltimore Sun)

It's been a mostly terrible year for Under Armour. Last week, we detailed that the company launched a subscription box in the hopes of revitalizing slumping sales. This week, we got word that the company is in much worse shape than we initially thought.

According to The Washington Post, the company announced on Tuesday that sales are down for the first time since 2005. The bad news sent the company's stock declining nearly 19 percent.

“This is an abrupt about-turn for a company that, until recently, was on a mission to challenge the might of Nike,” Neil Saunders, managing director of the analytical firm GlobalData Retail, said in an email to The Washington Post. “Under Armour has become just another brand in a sea of brands.”

Saunders pointed to multiple problems that landed Under Armour in this situation. The first being that the company has not managed to cultivate a loyal following. He also said the company has not resonated with women the way its rivals, like Nike and Adidas, have. In addition, Sports Authority and Sports Chalet's bankruptcy filings have posed some hurdles for the company. All these factors are culminating in what Patrik Frisk, the company's president and chief operating officer, is calling a perfect storm.

“Both internal and external factors are hitting us really hard," he said in a Tuesday call with analysts.

In terms of the numbers, North American sales fell 12 percent in the most recent quarter, and overall sales fell 4.5 percent. Profits fell 58 percent to $54 million from $128 million last year.

“We are incredibly disappointed with our 2017 performance,” Kevin Plank, Under Armour’s founder and chief executive, said during the call with analysts. “We have not performed to the level we had originally aspired to.”

“In no way, shape or form do we anticipate changing the pricing model that makes Under Armour special and unique,” he continued. “We invented the $25 T-shirt. We’ve pressed the bounds as to what consumers will pay for apparel. That’ll continue. No one is looking for Under Armour to have the $25 hooded fleece. They want Under Armour at the $75 and $100 price points.”

That might be high hopes for the company, as analysts predict consumers will be less likely to get back on board with Under Armour if the company refuses to lower prices.

We don't think Under Armour's demise signals an overarching issue for athletic apparel, but only time will tell.