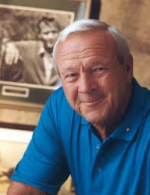 Arnold Palmer, known for being the first person to mix lemonade and iced tea (and also his legendary golf career), has formed a licensing agreement with Sport Casuals Inc., Boca Raton, Fla., for licensed apparel.

According to Golf Digest, Palmer entered into a multi-year agreement with the apparel company to design and distribute Arnold Palmer-branded apparel. Proceeds will go toward the Arnie's Army Charitable Foundation, which focuses on a multitude of programs for children and youth.

"We are thrilled to the moon," Mike Shea, chairman and CEO of the new Arnold Palmer Apparel Company, told Golf Digest. "We couldn't be more proud to be associated with Mr. Palmer and Arnie's Army Charitable Foundation."

The line will include polo shirts, pants, shorts, rain and wind gear, and pullovers and other layering items. The first collection will come out in spring 2017, but Shea told Golf Digest that he expects the products to be in some retailer locations by the end of the year.

"We have spent considerable time and effort identifying the right company to join us in this mission, and we feel we have created an ideal arrangement," Palmer said in a statement to Golf Digest.